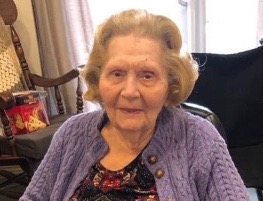 Carmela, aka, “Millie” or “Nonna,” grew up in Millburn, New Jersey, the eldest child and only daughter of Saverio and Assunta Caivano. Learning from her mother, Carmela excelled in cooking and baking, often making homemade bread, pies, and pasta, rolling out the dough on a wooden board on the kitchen table. She also developed a talent for sewing at a young age, was apprenticed to a fitter, and later became a professional dressmaker. She created beautiful clothing for herself, her mother and brothers, her clients, and eventually, her children.

In 1950 Millie married Sabino (Sam) Moschella, her beloved husband of over 60 years, who predeceased her in 2013. They lived first in Cranford and then in Mountainside, New Jersey, where they raised their five children. Millie devoted herself to her husband and children, making a home for them, cooking delicious meals, sewing, cleaning, and chauffeuring them around. She was active in Our Lady of Lourdes Church, served as a Den Mother and Girl Scout leader, and entertained family and friends in high style.

The family moved to York, Pennsylvania, in 1973. There, Millie took on more volunteer work, including visiting residents of Pleasant Acres nursing home and creating small craft projects for them. After putting their five children through college, Millie and Sam took trips to Italy and several other countries in Europe, Asia, and the Middle East. In 2013, they moved to Silver Spring, Maryland, where they lived at Riderwood Retirement Community. There Millie crocheted beautiful afghans for her children, grandchildren, and friends. She enjoyed zooming around in her motorized wheelchair, going to Mass, doing puzzles, and playing (and winning) Bingo.

Carmela is survived by five children, Susan Michnewich of Laurel, Maryland; Mary Clark Moschella (and Douglas Clark) of Guilford, Connecticut; Thomas (and Barbara) Moschella of North Potomac, Maryland; James Moschella of Brooklyn, New York; Theresa (and Kevin) McKernan of Millersville, Maryland; and nine grandchildren: Daniel (and Olesia), Matthew (and Alison), Ethan, Abbey, Katharine (and Jay), Stephen, Jack, Mary, and Heather. Carmela was predeceased by her brother, Nicholas Caivano, in 2012.  She is survived by three brothers, Rocco, Daniel (and Jo), and Joseph (and Carol) Caivano, as well as numerous nieces and nephews.