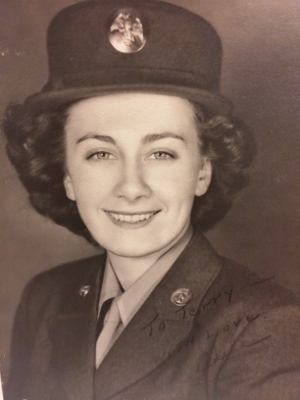 Adele Stulpin, 99, of Union, NJ, passed away at her home on March 15, 2021.  Funeral services are private.  Arrangements are by Bradley, Haeberle & Barth Funeral Home.

Adele was born and raised in Union, NJ, the daughter of Charles and Katherine (Becker) Seitlinger and graduated from Union High School in 1940.  She proudly enlisted into the United States Women’s Army Air Corps in 1943, completed her Basic Training in Des Moines, IA, and was stationed at the Gravelly Point Army Air Corps Field in Washington, DC.  In her early years, Adele worked at a bank in Newark where she met her future husband.  She later worked as an administrator for Grace Lane Business Services in Union until her retirement in the mid 1980’s.  Adele was a long time member of the Union Seniors including the Monday Club and the Thursday Club.  An avid bird watcher, she loved all animals, wildlife and gardening.

Adele was the beloved wife of the late Edward Stulpin who passed away in 1987.  She was the loving mother of Glenn Stulpin.  She is also survived by many relatives and her caregiver, Maureen Hoilett.  In lieu of flowers, donations in Adele’s memory may be made to the New Jersey Humane Society, 6412 Dewey Ave., West New York, NJ  07093.