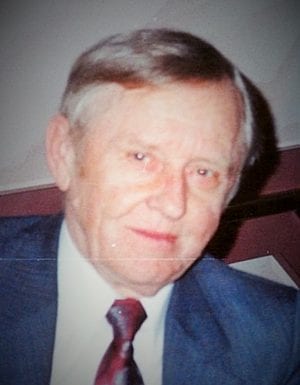 Alexander Leskiw, of East Hanover, passed away on September 25, 2020 at the Ingelmoor Rehabilitation Care Center in Livingston at the age of 94.  He was born on January 7, 1926 in Voloschyna, Ukraine to the late Michael and Maria (Osadca) Leskiw.  A long-time resident of Queens, NY, he retired to East Hanover in 2002.  He was a parishioner of St. George Ukrainian Catholic Church in NY and subsequently of St. John the Baptist Ukrainian Catholic Church of Whippany.

Upon arriving in the United States, he was inducted into the US Army, where he proudly served with the 24th Infantry Tank Division during the Korean War.

Alexander studied engineering in the prestigious Karlsruhe Institute of Technology in Germany and subsequently at Columbia University in New York where he received his Master’s Degree in Mechanical Engineering.  He spent the majority of his professional career at S&S Paper Corrugated Machinery Company in Brooklyn.  He was employed there for over 40 years, retiring as chief design engineer for converting equipment.

He was the beloved husband of 63 years of Daria (Elyjiw), devoted father of daughter Ulana Markiv with husband Volodymyr, son Mark with wife Lisa (Voci), loving grandfather of Dominick Leskiw and Erika Markiv, dear brother of Olga Horodecky and uncle of Adrian Horodecky, brother-in-law of Volodymyr Elyjiw with wife Orysia (Brodowicz) and children Adriana and Nestor.

The family understands and acknowledges that many people may not be comfortable in group settings in these trying times.  Please keep them in your hearts and prayers.

Funeral Home:
Bradley-Braviak Funeral Home Visitation Hours:
Sunday, September 27, 2020 from 6:00 - 8:00 p.m. with Parastas commencing at 7:00 p.m.
Bradley-Braviak Funeral Home, 49 Whippany Rd., Whippany
Please be advised that COVID 19 protocol restricts us to 50 guests maximum at the funeral home and that the wearing of a mask or face covering is required. It is also requested that responsible social distancing is maintained. Funeral:
A private service will be held on Monday, September 28, 2020 Committal:
Gate of Heaven Cemetery Memorial Gifts:
In lieu of flowers, those who wish may contribute in Alexander's memory to either the St. John the Baptist Ukrainian Church Building Fund, 60 N. Jefferson Rd., Whippany, NJ, 07981
or the Ukrainian Museum, 222 East Sixth Street, New York, NY, 10003