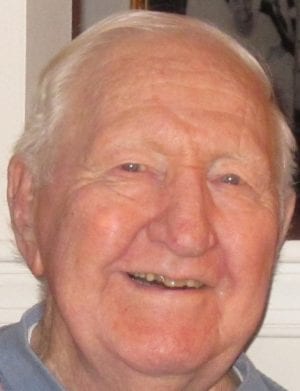 Alfred L. Walsh of Whippany passed away peacefully on January 8th after a brief illness. He was 94.

Al was born and raised in East Orange and was a graduate of Clifford J. Scott High School. Immediately following graduation he enlisted in the Army where he served as a Sergeant and Light Artillery Instructor at both Fort Knox & Fort Bragg.  After WWII he attended Panzer College and became an East Orange police officer. Following his lifelong dream and true calling, he left the police force and joined the East Orange Fire Department where he rose to the rank of Captain, retiring in 1977. While a firefighter he also worked in the banking industry eventually becoming an Assistant Treasurer with Hudson City Savings.

Al and his family moved to Florham Park in 1967 where he was an active member of his community and Holy Family Church.  Some of Al’s fondest memories there included calling bingo, putting up pools with his neighbors and reveling in the town’s Fourth of July festivities. A consummate handyman, he enjoyed building on to, and enhancing their home.

Al was a proud member of American Legion Post #155 and was a former trustee on the board of the Eden Lane Condominium Association.

He was pre-deceased by his wife Doris, his father Michael, his mother Theresa, brothers John (Jack), Stephen, Joseph and sisters Mary Cruser and Teresa Dyer. Al is survived his beloved daughter Noreen and son-in-law Jim Condito, as well as his many treasured nieces and nephews.

He will be lovingly remembered for his smile, laughter, kindness, wealth of knowledge and readiness to help others by his family, friends, neighbors and all who crossed his path.

Services will be private with the family at Gate of Heaven Cemetery.

To send the family a condolence, please visit, www.www.bradleyfuneralhomes.com