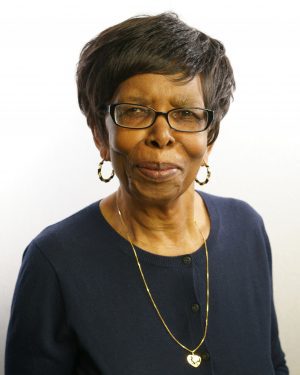 Click here the Visitation & Funeral Service Livestream
from 10am to 1130am on June 4th.

Beloved mother, wife, aunt, cousin, sister & friend… Amelie Exantus (82), also known as “Michel” of Union, NJ passed away surrounded by loved ones in her home on Sunday, May 22nd, 2022.

Amelie was born in Croix-des-bouquets, Haiti.  She lost her mother Ellmire early at the age of 1, so she along with her sister Andrelie were raised by their grandmother ‘’Gran Mayotte’’.  From there, she spent some time in Port-Au-Prince, Haiti, with her Aunt Chouchou.  In Port-au-Prince, Amelie completed her middle schooling at École Nationale Caroline Chauveau and then finished her professional education at École Hôtelière d’Haïti.

Years later, Amelie’s dear cousin Josette was working in Florida for a young family by the name of Ostrow as an au pair.   The Ostrow family expanded and asked Josette if they knew of anyone that could help their son who was just starting a family of his own in New Jersey.  Josette could not recommend Amelie fast enough and so in 1965, Amelie came to the United States… settling in West Orange.  As the son took trips to Florida to visit the family, Amelie traveled with them and would stay with Josette.  The two were thick as thieves and their summers were full of fun on the beach.

After a while, Amelie leased her first apartment in Newark across from Branch Brook Park.  She later trained to become a Nurse’s Assistant and was hired by Clara Maass Hospital in Belleville, NJ.  She would work there for over 30 years, caring for countless patients and earning the Clara Maas Employee Recognition Award which is awarded to individuals with the best patient feedback.

It was during this time that Amelie met her future husband of 48 years, Preserve.  Her future sister-in-law, Yvrose Lythus also lived at this apartment building and introduced the two.  Amelie and Preserve would marry in 1973 and have 3 children, Edwin, Pierre & Ketsia.  Ketsia tragically did not survive as she was born only 6 months into the pregnancy.  While this absolutely devastated them, she persevered and poured all of her love into her sons.

Amelie and the family would move to the Vailsburg section of Newark in 1977 where they would live for 23 years, then moving to Union where they currently reside.

She retired in 2000.  In retirement, she beat both colon cancer & breast cancer, fighting through numerous surgeries… She struggled with debilitating neuropathy for over 20 years, finally succumbing to congestive heart failure.  All the while she remained the heart and soul of the family.  If you called her on the phone, she would never allow her voice to let you know she was struggling.  If you came to visit her, you would only notice her cheeky grin as she loved to be with people.  It was therapy for her. She was the embodiment of God’s grace here on Earth as all she ever wanted to do was help.

In 2017, Amelie, made one of the biggest decisions of her life becoming a baptized Jehovah’s witness following in the footsteps of her father, Phanor Michel, her beloved sister Andrélie Michel Arias and all her sister’s children.  She became a dedicated Jehovah’s witness associated with the North Haitian Creole, Hillside Congregation.  She was very much loved and respected by all the brothers, sisters, and friends in the congregation.   She was truly an inspiring pillar of strength and love.  “Everyone’s Auntie”… She will be desperately missed by all who loved her.

May her soul find peace in the presence of the Lord.