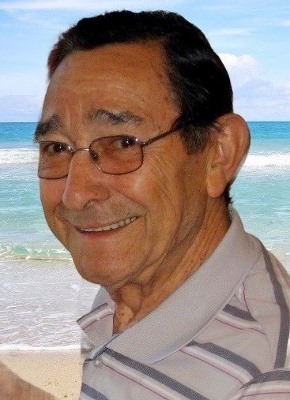 Amilcar Oliveira, 82 of Basking Ridge, New Jersey passed away on Thursday, May 7, 2020 at Center for Hope Hospice after a brief illness. Funeral services are private.  A memorial mass will be scheduled at a later date.

Amilcar was born on February 7, 1938 in Vagos, Portugal. He was the son of Alberto & Rosa Oliveira.  As a child he was afflicted with a bone decalcification, and spent many years in and out of hospitals. Unable to run and play because his leg was always in a cast, he taught himself to play the guitar and sing. He said “I learned to be funny and entertain my friends, so when people saw me they wouldn’t feel sorry for me because I needed my 12inch boot so I could stand and walk”.  He ran all the projectors at the one movie theater in town and then would go work the overnight shift in the family bakery.

He met the love of his life Leonor while she was visiting family in Vagos. They married and both went to work in Amilcar’s family bakery. He was an amazing baker and made the best Portuguese breads. In 1967 they immigrated to Newark NJ, so they could be close to Leonor’s family. He was a member of Sporting Clube Portugues and a past president of Lar dos Leoes both in Newark, NJ. He had many jobs before owning Ali’s Corner Luncheonette in Newark. After 23 years he retired and moved to Union, NJ where they lived for many years until they moved to live with their daughter Nella in the last few years to Basking Ridge, NJ.

He is survived by his wife Leonor of 57 years, his daughter Suzanne Fraser and her husband Lance and daughter Nella Oliveira. He was the adoring grandfather of Danielle, Jillian, Jaclyn, Justin and Ciara. He is also survived by many nieces, nephews, great nieces and great nephews in the USA, Portugal, Canada, Brazil and France. Donations in Amilcar’s memory may be made to St. Jude Children’s Research Hospital.

Funeral Home:
Bradley-Braviak Funeral Home Funeral:
Private. A memorial mass will be announced at a later date. Memorial Gifts:
Donations in Amilcar’s memory may be made to St. Jude Children’s Research Hospital.