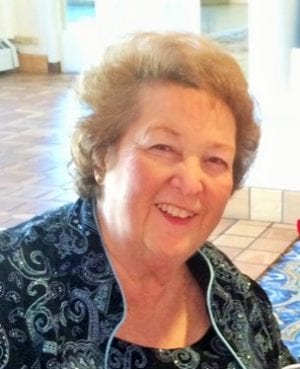 The live stream of the funeral mass held at 10am Sat, 2/6 can be viewed on the Corpus Christi Parish Livestream page by clicking here.

Angelina Theresa Buono (“Angie”) of Chatham, NJ passed away, surrounded by her daughters, on January 31, 2021.  She was 87 years old.  Angie was born on August 22, 1933 in Brooklyn, NY where she resided until moving to Chatham, NJ in 2006. She had returned to the workforce after raising her children and held a number of administrative positions at Verizon until her retirement in 1999.

In her retirement, Angie enjoyed spending her days with her beloved husband Rudy, going to Mass and enjoying a cup of coffee while sitting at Stanley Park.  Angie was devoted to her faith and to her family.  She loved cooking for her children and grandchildren, spending time with them, attending grandchildren’s sports games, swim meets, band and chorus concerts, dance recitals and Marching Band competitions! She was an integral part of her family’s daily life. She loved sharing many Italian traditions with them such as how to cook the Christmas Eve Feast of the Seven Fishes meal, and how to make strufoli and the best Easter meat and grain pies!  She taught her grandchildren how to roll and cut the perfect strufoli dough and the secrets to her delicious Easter pie fillings!    Most of all, she taught her family how to live their Catholic faith, and how to persevere each day through the darkest of times. She faithfully prayed the Rosary each morning and she had a special devotion to our Blessed Mother, St. Theresa of the Little Flower and St. Padre Pio.  She prayed the Sacred Heart of Jesus prayer each morning as she left the house.  She lovingly cared for her husband and her daughter Joanne through their illnesses until their passing.  Angie loved the Jersey Shore and Montauk, watching sunsets, cooking and eating what the family caught while fishing, Kohr’s orange and vanilla swirl ice cream, boardwalk games and many friendly games of Pokeno. Angie lived her life with grace and gratitude, love and loyalty and was profoundly appreciative of the kindness that was shown to her.

Angie was predeceased by her parents, Alfonso and Concetta Genovese (she was their first child born to them after they emigrated to the United States from Avellino, Italy with her older siblings), her brother Pellegrino and her sister Irma, her beloved husband Rudy to whom she was married for 63 years at the time of his death in 2014, and her oldest daughter Joanne Konecny who passed away in 2008. Surviving are her daughters and son-in-laws: Paul Konecny, Mary Zingone (Louis), Antoinette Walsh (Thomas), Barbara Stanton (Matthew) and Doreen Peritore (Marcello). She is also survived by thirteen grandchildren, Christopher Konecny (Sara) and Michele Glienke (Mike), Dan (Angela), Paul and Michael Zingone, Liam and Thomas Walsh, Matthew Jr., Shane and Maggie Stanton, and Andrew, David and Daniel Peritore, and three great-grandchildren, James Zingone, Jake Blade and Brooklyn Konecny.  Angie is also survived by her beloved nieces Dorothy and Debbie, nephews Barry and Brian and by many extended family and close friends.

Funeral Home:
Wm. A. Bradley & Son Funeral Home Visitation Hours:
Due to Covid 19 restrictions and safety concerns, the visitation will be private Funeral:
The funeral Mass will be private. However, it will be live-streamed from Corpus Christi Church on Saturday, February 6, 2021 at 10:00 a.m.
Please check back for the link to the live stream. Committal:
Gate of Heaven Mausoleum, immediately following Mass Memorial Gifts:
Triple Negative Breast Cancer Foundation (in honor of her daughter Joanne), PO Box 204, Norwood, NJ 07658 or to the Chatham Emergency Squad, 45 Spring St., Chatham, NJ 07928