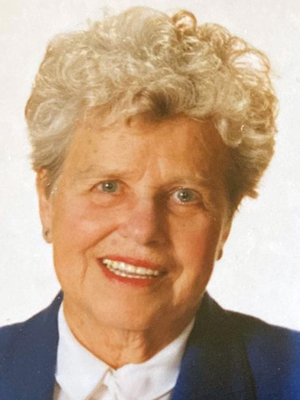 Anna fondly remembers her childhood.  Her mom was a women’s clothing buyer and taught Anna all about fashion. On weekends her dad would take her to the Opera, plays and museums in Philadelphia.

Anna received her high school and business college education in Philadelphia.  She became a secretary for Kemper Insurance Company, meeting the “love of her life”, James Wilson at a company dance.  They married on August 17, 1941.  The next day, Jim was shipped out with the Army to Europe to fight in many battles of World War ll, including the Battle of the Bulge.  He returned five years later!

Anna’s career then became a housewife and mother to sons, James and John.  In 1955, they were transferred to Chatham, NJ where Anna became active with her family at Gloria Dei Lutheran Church, school sporting games, and summers at The Noe Pond Club. Many memories were also made vacationing at Eagles Mere in the Allegany Mountains.

After a short transfer move to Mansfield, Ohio, Anna’s husband became President of the Eastern Division of Kemper Insurance and the family moved to Summit, NJ.  Here she entertained often, hosting dinners and parties for Kemper employees.  At 50 years of age Anna learned to play golf and became an 18 holer at Canoe Brook Country Club.  Upon retirement, Anna and Jim enjoyed traveling with friends, playing golf and duplicate bridge.  But, they most loved watching their family grow, taking them on vacations to Disney World and cruises to Bermuda.  During quiet times Anna loved to knit and made cable knit sweaters for everyone in the family and hundreds of hats for the babies in the nursery at Overlook Hospital.  Anna loved to cook and bake.  Mom Mom’s Thanksgiving Dinner and Apple Pie Tart were a family favorite.  Anna’s zest for life was an inspiration to all who knew and loved her.  She will be deeply missed.

Our family wishes to thank the entire staff of the Chatham Hills Subacute Care Center for their compassionate and heroic care for our Mom during the last three and one half years of her life. We will always remember your kindness and empathy to Anna and our family.