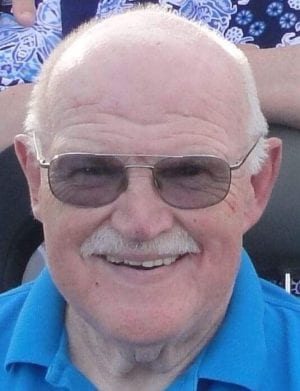 Born in Summit to the late George A. and Blanche Whiteman Rex, Bruce was a graduate of Chatham High School, class of 1958.  He immediately entered the Navy after graduation and served for two years before being medically discharged.  After returning home, Bruce began his career at CIBA Geigy in Summit in packaging then as a pharmaceutical operator.  While there, he was elected as the Treasurer for Chemical Workers Union, a volunteer position that he held for 15 years.  He was a member of the CIBA First Aid Squad, earned his EMT, and trained new members.  He retired in 1995. Bruce spent five years studying history at Fairleigh Dickenson University in Madison in the evenings.  He was also the co-owner of Jugtown Mountain Smokehouse for six years.

Throughout his life, Bruce has been very involved in Chatham activities, presiding as co-president of the Fairmount Avenue School PTO, chairing PTO fun fairs and coaching soccer and baseball.  In 1990, he received the Chatham Community Spirit Award for his efforts.

Bruce was an instructor and instructor/trainer with American Red Cross in Summit, where he served as Health and Safety Chairman and earned his 35-year pin.  He taught a variety of Red Cross courses: First Aid, CPR, AED, Babysitting, Instructor Training, Pet First Aid, and worked at their blood drives and blood pressure clinics.  Bruce also volunteered with Hospice and served as President of the Summit chapter of the AARP and was program chairman.

Bruce suffered with Charcot-Marie-Tooth Disease his entire adult life.  This progressive neurological disease led him and his family to apply and receive a service dog to assist him from Canine Companions for Independence.  Satchel joined the family in February of 2008, and was a loving and helpful companion to Bruce until 2013 when he passed.  Bruce and Satchel were active representatives of CCI, doing presentations in all sorts of venues.  They also joined the Paws for People program at St. Hubert’s, regularly visiting hospital patients together.

As part of his regiment in fighting CMT, he was a regular fixture at the Chatham Club fitness center working out, as well as doing all of their CPR training.

In spite of his battle with CMT, Bruce remained very active.  He was a passionate gardener and with his wife, Kathy, loved traveling.  He was a supporter of all of Chatham’s teams and an avid fan of his grandchildrens’ activities.  Up until the COVID-19 restrictions, Bruce would do monthly blood pressure screenings at the Library of the Chathams.  In addition, he enjoyed the New York Yankees, reading, shopping and especially spending time with his children and seven grandchildren.

He was the beloved husband of Kathleen; loving father of Stephen and his wife Sue of Newton Upper Falls, MA, Karen Lambert and her husband Ronald of New Providence, and Michael and his wife Teresa of Leonia.  He is also survived by his cherished grandchildren: Kelsey Rex, Brian Rex, Matthew Rex, Christopher Lambert, Gregory Lambert, Declan Rex and Gavin Rex.