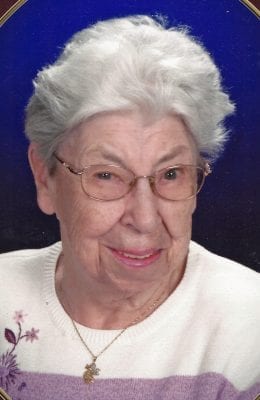 Catherine Wermann was born on March 20, 1919, just after the peak of the Spanish Flu of 1918 and survived until just after the peak of the Corona Virus, passing away on May 9, 2020.  During that time, she was a thermometer engraver, a housewife and mother, a school aid, a bakery salesgirl, and a bank teller.  She lived most of her life in her parent’s house in Glendale, Queens.  She was past president of American Legion Post 104 Lady’s Auxiliary and life member where she frequently worked bingo and country western dances.

She moved to Erhardt Gardens in Union 15 years ago, where she made many new friends.  Two years ago, she transferred to South Mountain Healthcare and Rehabilitation center where she passed away.

Catherine was Mom to Bruce and Kathy, Aunt to Carole, Walter, Paul and George II, Grandma to 7 grandchildren, Big Grandma to 16 great-grandchildren, all of who survive her.  As the oldest member of United Methodist Church in Union, she was Grandma to the entire congregation who she loved.

She was predeceased by her husband Bjarne, sister Irene, and brother George.