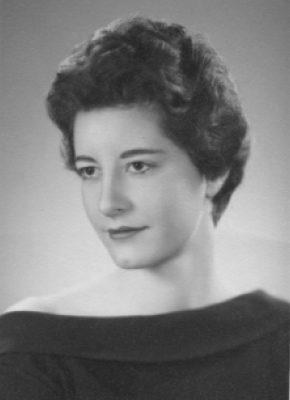 Click here to view the Service of Remembrance
live-stream at 11am on Tues, 8/24

Claire was the only child of Nobel and Edna Armstrong and mainly grew up not far from her maternal grandparents in Garden City, Long Island.  She moved to La Grange, Illinois, as a preteen and then to Summit, New Jersey, in her junior year of high school where she graduated with the Summit High School Class of ’56.  Then, Claire was off to college to begin at Texas Christian and transferred to Dennison University in Ohio where she graduated in 1960.  She spent a summer break at Point O’Woods on Fire Island taking care of the four-year-old daughter of her neighbors and life-long family friends, Jim and Mary Ann Bennett. There she introduced the Bennett Family to The Kingston Trio, with an emphasis on the song “Rioting in Africa.”

Claire had an interesting life as an independent woman whose career began with the Bell Telephone Company in Boston living in Beacon Hill with several roommates.  She transitioned to employment in market research in New York City where she worked for two of the most prestigious firms renowned in that field.  She began at Young and Rubicam and after some years worked for J. Walter Thompson.  Towards the end of her career, she transferred to Directions for Decisions and did free-lance work.

Claire loved being a New York “girl” and having her own studio apartment on the upper East side, –even with a doorman.  She lived on the 13th floor in a building at 401 East 65th Street and could actually see the Roosevelt Island tram from her windows before other construction got in the way years later.  She noted that many buildings in New York didn’t have a 13th floor and skipped from the 12th to 14th to avoid bad luck with number 13, which didn’t bother Claire.  She loved New York City and took advantage of so much of the art and culture that could be easily found there.  A close friend at Young and Rubicam, Rose Curcio, introduced Claire to the ballet, and this dance became an obsession with Claire.  She attended many performances often with “standing room” tickets.  Rudolph Nureyev was her favorite dancer, and Claire said “Giselle” was the ballet that she loved the most.   Her friends also initiated her interest in following tennis greats, and she became a regular at the tennis competition at Forest Hill, Queens. When she couldn’t get on site, she was glued to her TV watching McEnroe and his contemporaries.  She was a regular at museums, especially the Metropolitan Museum of Art, where she was a member.  You could always count on a Met Christmas card from Claire.

Claire moved to a townhouse in Berkeley Heights, New Jersey, in 1996, and she also kept her condo in New York City for a number of years.  This way she had the best of the suburbs and could still enjoy her favorite city.  She kept her friends in the City and was able to spend more time with her New Jersey friends.

Keeping in touch with friends through birthday and Christmas cards was especially important to Claire.  She prided herself in being on time and letting those who meant a lot to her know that she was thinking of them.  She was a loyal friend who would be glad to give a ride, run an errand, and come along for good company on a shopping excursion, lunch, a ride down the shore, or whatever was suggested.  Walking in Watchung Reservation or the Summit Arboretum were treks she enjoyed.  She could be counted on to be available when you wanted companionship.  She and her friend Anne Klingenburg were faithful friends for years to an elderly WWII Veteran and friend who was in Lyons Veterans Hospital.  They would visit her and take care of whatever she needed.

Although Claire loved her New York apartment and her townhouse, she enjoyed traveling.  Her most memorable trip was the six weeks tour of Europe that she took with a few friends after her college graduation.  She often spoke about the places they visited and the fun they had.  She did get back to Europe seeing Spain, Portugal, and a trip to France with some close relatives.  Visits to Long Island to her good friends, the Bennett’s, shore home at Point O’ Woods was a trip she always looked forward to.  Also, traveling with the Bennett matriarch, Mary Ann, on a cruise or drive to Florida were favorite excursions for Claire.  She said she wanted to do something special for her 70th birthday, and she was the only single woman who embarked on her Summit High School’s 50th class reunion cruise to Bermuda.  The trips she looked forward to the most were to see her close cousins, the Mary and Al Griffin family, in Ohio and nearby Kentucky.  Since Claire had no siblings, this family filled the role, especially at the Christmas holidays.  Whenever you shopped with Claire, she was always looking for the gifts to bring to their annual Christmas gift exchange.  If she couldn’t find these gifts in a store, she was on the mailing list for an extensive collection of catalogs from which she ordered the most unique gifts for relatives and friends.  Catalog shopping was a passion of Claire’s.

Claire moved to Lantern Hill, a new continuing care community in New Providence, New Jersey, in 2016.  When questioned about the main reason she moved there, she said one word, “Food.”  Claire didn’t like to cook and, as a result, she would often relate that she had a peanut butter and jelly sandwich or cereal for a meal. Vegetables were not a favorite, and chocolate was often close at hand.   She was always happy to accept a lunch or dinner invitation and willing to go out to eat.

Fortunately, Claire was able to receive the care she needed at Lantern Hill during the decline of her health.  She made friends there and was well liked by other residents, her caregivers, and the staff.  She is greatly missed by all of us who were fortunate to be among her relatives and friends.   Claire would want us to keep our good memories of her.