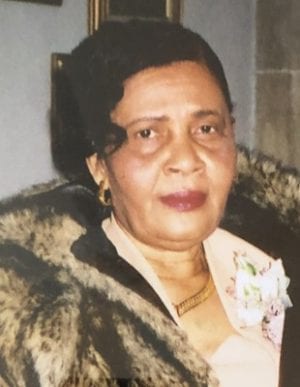 Claudie was born on January 18, 1940 in Aquin, Haiti to Bresil Brezier and Lucie Coulange. She was known to her family and friends by the tender name of “Nounoune.” She practiced nursing in Haiti for more than ten years and continued to provide medical assistance from the time she moved to the United States until her retirement. She was married to Wiener Simon. They raised a son, Laurent, and a daughter, Wieny.

Nounoune was a devout Christian. She loved to worship daily by watching Catholic Holy Mass on television and would recite the Psalms. She enjoyed spending time with her family and always inquired about their days and experiences. At gatherings, she was the life of the party and one could revel in that unforgettable smile when she was on the dance floor. As the ultimate matriarch, Nounoune was the center of a universe filled with an abundance of beautiful friends and family who admired and adored her. She had a big heart and made it her mission to take care of others. Nounoune exuded simplicity, loyalty, honesty and love in all aspects of her life.

Claudie was preceded in death by her father, Bresil, mother, Lucie, brother, Raguel and husband, Wiener. She is survived by her two children, Laurent and Wieny, her sister Lucienne (Popo), her grandchildren, Kevin, Wendie, Francesca and several cousins. The funeral arrangements, entrusted to Bradley, Smith & Smith Funeral Home are private.  There will be a celebration of life for Claudie announced at a later date.