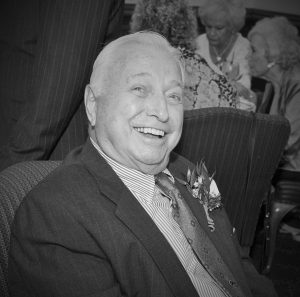 Gus was born to the late Salvatore and Lucia Solazzi in Springfield on September 22, 1921. The family moved to Millburn, NJ where he grew up. After grade school he chose to attend Carpenters trade school in Irvington New Jersey. His first job was with a small cabinet maker who taught Gus most of his skill.

Gus served in the US Army from 1942-1945. He was part of the North African invasion in Oran as a member of the 74th CA (Anti-Aircraft) regiment.  The regiment then moved from Oran to Sardinia as part of the Italian campaign.  As the Allies achieved air superiority the AA Regiment was disbanded and sent to Marseille, France and incorporated into the Combat Engineers.  There he served as a carpenter, re-building bombed out drainage systems, bridges etc. during the Rhineland and Central Europe Campaigns.

Returning from the war, in 1945, he joined the carpenters union and worked for a local contractor for many years. He worked several jobs through the union and retired in 1985, one of the oldest members of that local.

He never looked for praise. He was a workhorse. A man who helped others, all the time. He was never one to boast, he just kept on quietly working for those he loved including Saint James church where he served as a handyman time it again as well as an usher for many years.