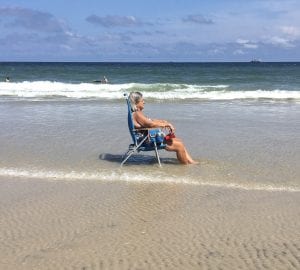 Diane grew up in Bridgewater, NJ, in the house her father built. She married in 1967 and moved to Millburn, NJ, where she was a resident for over 50 years. Her home away from home was Seaside Park, NJ. Her love of the shore began as a little girl, and continued throughout her life. She kept the Jersey shore tradition alive and instilled that same love in her children and grandchildren. A perfect day for Diane would be on the beach, the sun shining, sitting in her beach chair, working on her crossword, at the edge of the ocean with her ‘old lady cup’.

At the age of 18, Diane began working in the mailroom at AT&T. She took time off to raise her children, and then returned. Her most recent position was as Payroll Manager. She worked at AT&T for more than 30 years. She retired in 2004.

Diane was a warm, kind, and generous soul, who touched many people’s lives. She was there, for so many, in times of need. Many would describe her as their ‘rock’. Diane’s family was everything to her. Up until very recently, she hosted dinner at her house every Sunday for her children and grandchildren. She loved her grandchildren very much and never missed an opportunity to spoil them. She was an avid sports fan, a die hard Yankees fan, and a somewhat reluctant Jets fan. She loved Atlantic City, and frequently went there with family and friends. Diane always had a soft spot for animals, nursing baby kittens and birds found in her yard. Although her dog, Scruffy died over 20 years ago, she still kept a picture of her on the window sill. She loved all music, especially doo-wop. She was always eager to share the story of how she went to see The Rolling Stones in Asbury Park in the 60s.

In lieu of flowers, please send donations to the Millburn-Short Hills Volunteer First Aid Squad https://www.mshvfas.org/. You will be able to specify who you are donating on behalf of, if you wish.