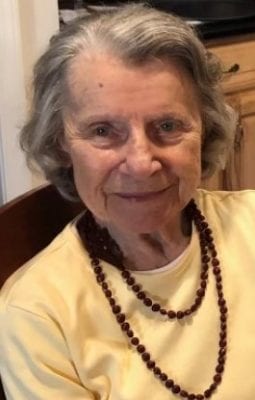 Dorothy was born on August 7, 1926, in Jersey City. She was the daughter of the late William F. and Katherine (Lehnert) Bischoff. She was raised in West New York, where she graduated from Memorial High School in 1943. She furthered her education at State Teachers College, Trenton, and earned a BS degree in 1946.

Dorothy started her teaching career at Montvale/Hillside NJ Public Schools, where she worked as a music teacher for grades K-8 from 1946 to 1950. She later taught music in the elementary grades for the Hanover Township Public Schools from 1967 to 1991. Her career in education earned her The Governor’s “Teacher of the Year” award in Hanover Township, 1986-1987. She was also a volunteer piano accompanist for the Florhamaires choral group in the 1960s.

Dorothy, known as “Dot,” was petite in stature but had an enormous capacity for friendship and empathy. She was a caring neighbor. Even after her retirement from teaching, her former students, spotting her in the community, would approach her and tell her how much her music class meant to them. Dorothy loved to cook and took great pleasure in trying new recipes for her appreciative family. She was awed by and found solace in nature, whether the lakes of Maine, the mountains of North Carolina, the Frelinghuysen Arboretum, or her own yard. She was a voracious reader of newspapers and magazines, and relished learning about the arts, nature, and history from watching PBS, especially the films of Ken Burns.

Services were private. To honor her memory the family requests thanking a teacher.