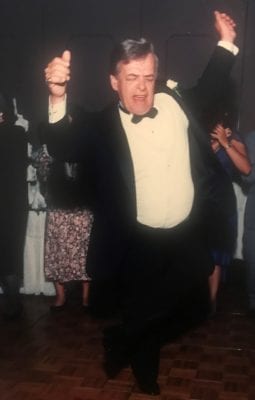 Pop was one of 6 children born to Saverio and Carmella Gallitelli who emigrated here from Italy in the 1920’s and lived on Main St. in Millburn, NJ until he was married.  A good 40 to 50-year age difference with his parents, he was the baby in the family with a 13-year gap between his next sibling, Sam “Stymie”, his older Sisters, Anne and Mary “Mimi”, helped his parents raise him, no easy task.  His older Brothers, Frank “Ging” and Ben, also contributed, taking him to the Jersey Shore and teaching him how to hunt and fish.  Family gatherings and Italian traditions were a mainstay of his growing up in Millburn.  Helping in the big garden, making homemade Italian wine all under the watchful eye of his Dad, our Poppi. Through the years he became interested in cars, maybe that’s where one of his many nicknames    “Hot-rod” came from.  Legend has it, he did some stock car racing in the mid to late 50’s and, actually beat Mario Andretti in a race during his early years of race car driving.

As fate would have it, in 1953, his Senior Year at Millburn High School, he met and fell in love with Marie Goglia, a Freshman.  Dating for the next 4 years until Mom finished school.  They were married in 1959 and began a life together, living in Millburn.  Dad became a carpenter in the mid 50’s, working under the tutelage of his older Brother, Ging, and, actually worked on some prominent buildings in the area, Bell Labs, Ciba-Geigy and the Short Hills Mall to name a few.

He then passed the Millburn Police Exam in 1961 and became a Police Officer for the next 28 years. Basically working 2 professions and building a family with Mom (the glue) and rock of our family.  Mom had numerous nickname’s for Pop, but we will keep this clean and go with “Good Time Eddie”.

The 1960’s and 1970’s were a simpler time and filled with lots of great memories.  The births of Ed Jr., Ann Marie and Robert were the highlights of course.  Growing up in the Wyoming section of Millburn, a real neighborhood with family and tons of kids living in basically every house on the street.  The Zarodkiewiczs, Lavertys, O’Gormans and Rini Roe to name a few, but the Zarods, Gene and Roe were the ones who struck that real special bond with Mom and Dad.

Holidays were a big part of the Gallitelli family during this time.  Those that come to mind, Halloween! Mom and Dad hosted a few parties dressing up as Mark Anthony and Cleopatra or Vampires before they became trendy.  As we were growing up, we can all remember the Halloweens where Pop dressed as Darth Vader or Bella Lugosi’s Frankenstein or Count Dracula while we were trick or treating in our neighborhood.  He was a big kid himself and really enjoyed it!

As much fun as Halloween was, Christmas season at the Gallitellis was the place to be.  Christmas music played the day after Thanksgiving and didn’t stop until sometime in January.  The decorations, the deer’s head mounted by the front door, the lights all set up and ready to go as soon as Thanksgiving was over, the driving force was Pop.  Pop learned to play the basic organ and if you were really lucky, he would sing his Christmas Caroles and play his organ for you instead of playing the Andy Williams, Nat King Cole or Bing Crosby Christmas albums, you couldn’t tell the difference, boy did he enjoy doing that!!!  He made Christmas that very special holiday that all kids need to have.  Going to extremes, with the bells on Christmas Eve, leading us to believe if we didn’t go to sleep there would be no presents/gifts under that tree.  The noises in the attic or on the roof all part of the game he loved to play revolving around believing in Santa.  Of course, Christmas morning was another tremendous memory with Pop, the 8 MM movie camera ready to go when we came down the stairs, the excitement, anticipation and fun the whole day carried.  Mom, with her great food and baking of all the traditional Christmas cookies and Pop putting together all the toys for us that didn’t come assembled.  Christmas Day was our day, no travel to any other relative’s house, they had to come to us.  Nanna and Poppi, Auntie Anne, Grams, Uncle Beans, Uncle Frank all would come over to share the day with us.

The 1970’s and 1980’s were filled with the devotion parents like ours showed to us.  We enjoyed spending a couple of weeks every summer in Lavallette, NJ or Normandy/Chadwick Beach at the Jersey Shore for family vacations.  The countless rides to practices, sleep overs with our friends.  The excitement game day would carry, football for me, Ann cheering or baseball for Rob.  Throw in some wrestling and all hell broke loose.

As the years went on, we all married, and our families grew with grandchildren.  While Mom passed on 26 years ago, Alyssa got to spend 4 years with her and Matthew 3 months.  Catherine, Andrew, Gianna and Julianna all were the affection of Pop Pop’s eye.  He loved spending time with his family and watching his grandkids participate in numerous activities; football, baseball, wrestling, girls’ basketball and high school musicals.

He was a “Golfer Extraordinaire” participating in numerous Casa Colombo and Millburn Fire Department Golf Outings over the years.  A round of golf with Big Ed was always an adventure.  Now, if I didn’t mention Pop’s vices to a good drink and smoke, you wouldn’t get the complete picture.  While these vices all contributed to his declining health over the years, we all wondered at the “Medical Marvel” he became, thank goodness for those strong Gallitelli genes.

He loved hunting, fishing and crabbing, introducing his nephew/nieces, kids and grandkids to the joys of the outdoors.  He was a devoted member to both the Millburn PBA, Casa Colombo and American Legion, serving in various leadership rolls over the years.  You could always find Pop at the Casa on Saturday and Sunday afternoons and the Legion for lunch a few times a week.  This was his social circuit as the years went by, right up to Sunday, March 15, his last time at the Casa.  He outlived most of his contemporaries, but the younger crowd all looked up to him, he will be missed.  He could also tell a good story and we all enjoyed those classics about fighting crime in Millburn over the years, just ask one of us.

Our house was the spot to gather at and our friends loved coming over enjoying the time spent with Mom and Dad.  Enjoying a good meal and lots of laughs became a staple at the dinner table.  The true testament to this proved to be this last week when friends new/old provided us with recollections of the Gallitelli family, Mom and Dad of course.

Here are a few of them – “Your Dad was truly one of my favorite faces to see in Millburn, what I loved about your Dad – he was always in a good mood, upbeat and happy”.  “A kind man, very approachable, he cared and remembered my conversations with him”.  “A true friend, a good guy, a great Dad.  Well now there is a good reason for the bars to be closed on this St. Patrick’s Day March 17, 2020.  Everyone in heaven will be laughing a little harder from now on”.  “A true one of a kind.”  “I remember when your Dad waited in the Millburn High School parking lot for days when some guy stole his boy’s bike, he was a great guy”.  “Your Dad and Mom were very good to us when we were kids, very kind.”  “Both of your parents were so loved, great and legendary, Pops was incredible.”  “Wonderful memories, of course he and your Mom will live in our hearts forever.”  “Both of your parents were so kind to me at a challenging time in my life. They gave me shelter and love unconditionally and let me be part of the Gallitelli family, many fond memories.”

So, when it’s all said and done, if we all can be remembered in this unique fond way, we would take it.  I know I would.

Pop was a loving Father/Grandfather and he loved Marie, our Mom, for 35 years – never remarrying after her passing in 1994.  We will miss you Pop, thanks for the great memories!