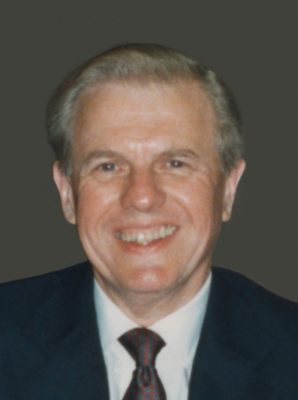 Edward C. Scheader, age 91, of Somerset, NJ, passed away at Morristown Memorial Hospital on Thursday, April 28, 2022. Ed was born in Brooklyn, NY, on April 10, 1931, to the late Edward and Katherine (Messemer) Scheader.

Ed attended Stuyvesant High School in Manhattan and obtained his undergraduate and master’s degrees in civil engineering from City College of New York. After college, Ed served in the Army during the Korean War. He returned to the U.S. in 1954 and began working for the New York City Bureau of Water Supply in its Design Division, while attending graduate school in the evening.

In 1957, he married Catherine (O’Reilly) Scheader. They were happily married for fifty-nine years, until her passing in 2016. Ed and Cathy lived in Matawan, NJ, for forty years and raised their family of two daughters and a son. They were very active members of St. Benedict Church and had many friends in the community.

Ed spent his entire career in NYC water supply, retiring as Deputy Commissioner and Director of the New York City Department of Environmental Protection (“DEP”), Bureau of Water Supply. His work focused on ensuring water quality, conservation, and environmental priorities, as well as dealing with the challenges of the drought years of the 1960s and 1980s. Perhaps the project closest to his heart was the construction of New York City Water Tunnel No. 3, an immense engineering project – the largest capital construction project in New York City history – that spanned decades. The tunnel was envisioned to provide New York City with a third connection to its upstate water supply, supplementing two water tunnels that had been built in the early 1900s. After the tunnel was authorized in 1954, initial planning and drafting continued for years, with construction beginning in 1970. Even after retirement, Ed and his fellow retirees continued to take joint trips to upstate New York to observe developments in projects throughout the NYC watershed that they had worked on while at DEP, including City Tunnel No. 3.

During retirement, Ed travelled the world with Cathy and close friends, and also did some consulting work for the DEP on City Tunnel No. 3, while Cathy wrote children’s books. A lifelong avid reader, Ed devoured his morning newspaper each day until the very end. He was a huge sports fan, with his favorite teams being the Brooklyn Dodgers, the New York football Giants, and the New York Knicks. He also shared his love of tennis with his children, sending them for lessons and taking them to the US Open and Virginia Slims tournaments.

In 2004, Ed and Cathy relocated to Somerset, NJ. Ed was beloved by all who knew him and is remembered affectionately by former co-workers from decades ago, and by friends in the communities in which he lived. He was known for his personal warmth, deep intellect, strong faith, and great sense of humor. He was a devoted husband and father.

Ed was preceded in death by both parents, his wife, and his sister, Dorothy McHugh, formerly of Las Vegas and Poughkeepsie, NY. He is survived by his three children, Barbara Scheader, John Scheader, and Susan Scheader, as well as three grandchildren, several nephews, and a niece.

Due to COVID, services will be private, with a memorial service to be held in the future.

The family wishes to thank Ed’s wonderful doctors and caregivers.

Funeral Home:
Wm. A. Bradley & Son Funeral Home Funeral:
Due to COVID, services will be private, with a memorial service to be held in the future.