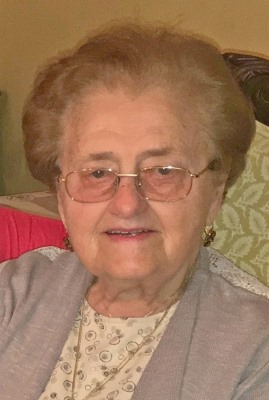 Elvira Kucyna, 91, of Parsippany, NJ passed away on February 14, 2022.  A Funeral Mass will be held at St. John the Baptist Ukrainian Catholic Church, 60 N. Jefferson Rd. in Whippany on Friday, February 18th at 10am.  Burial will follow at Holy Spirit Ukrainian Catholic Cemetery in Campbell Hall, NY.  Relatives and friends are invited to visit at Bradley-Braviak Funeral Home, 49 Whippany Rd. in Whippany on Thursday from 4 to 8pm with a Parastas Service beginning at 7pm.

Elvira was born on August 29, 1930 in Kyiv Ukraine, the daughter of Darius and Tatiana (Schulz) Huebner. Elvira’s family had immigrated to Ukraine from Germany in the 1850s. As World War II raged throughout Europe, Elvira’s family fled Ukraine in 1943 fearing retaliation by the Russians against anyone with German heritage. Elvira (age 13) fled with her mother and younger sister to Nordhorn Germany where they survived the rest of the war. After the war ended in 1945 they located other family members near Passau Germany and moved to be with them.  In 1949, while still in Germany, she met and married Andrej Kucyna and shortly thereafter immigrated to the United States. Andrej and Elvira first settled in New York City where they lived for 11 years. They both proudly achieved their American Citizenship in 1955. In 1960 the family relocated to Yonkers NY and lived there for 52 years where they raised three sons, before finally settling in Parsippany NJ in 2012 to be closer to their children. During these periods she was an active parishioner of St. Georges Ukrainian Catholic Church in NYC, St. Michael’s Church in Yonkers NY, and St. John the Baptist Church in Whippany NJ where she was a devote member of the Women’s Prayer Group.  Elvira worked many jobs over the years including cleaning services, pillow seamstress, light manufacturing at Precision Valve Corp in Yonkers and finally retiring from Sigmund Cohn Corp., a Jewelry manufacturer in Mt. Vernon NY.  Elvira loved cooking and baking, large family gatherings, singing Ukrainian and German folk music, and was exceptional at crocheting and knitting.

Elvira was the beloved wife of the late Andrej Kucyna (+2013); the loving mother of Yuri Kusina (wife Alexandra); Orest Kucyna (wife Maria), and Bohdan Kucyna (wife Kateryna). She was the loving grandmother to her cherished grandchildren, Mykola Kucyna (fiancé Natalia Kudryk) and Andrea Kusina (fiancé Mark Moravek). She was also the beloved sister of Valentina Filatov, Nicholas Porochnia, and predeceased by sisters Alla (+1935) & Anelia (+1938) Krynitzchko, and brother Leonard Porochnia (+2021).  In lieu of flowers, donations in Elvira’s memory may be made to the St. John the Baptist Ukrainian Catholic Church Debt Reduction Fund.