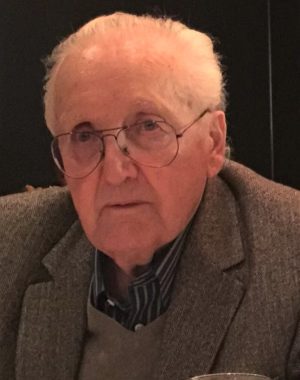 Frank Kobola, 94, died peacefully on December 2, 2022, surrounded by his loving family.  He was born March 6, 1928, in Kocevje, Slovenia, Yugoslavia, the son of Franc and Zofia Kobola.

After graduating Belgrade University with a degree in Metallurgical Engineering he came to America in the 1950s as a representative of the Yugoslavian government involved in the import and export of precious metals.  After living in America for several years, he sought and was granted political asylum and remained in the United States for the rest of his life.

He met and married Milica Bjeletich in 1955 in New York City, and shortly after relocated to Pittsburgh, PA.  In 1959 he and Milica moved to New Jersey with their son.

From 1959 through the 1990s he worked at River Terminal Development Company, where he ran one of the largest scrap operations in the country.  Many large WWII battleships were demolished there, including the original USS Enterprise. As the old ships became more and more scarce, he developed the site into a large industrial park.  Under his leadership and vision, the park grew to millions of square feet and became the home of many prominent companies.

With his talent and skills, he later formed his own real estate development company, Kobrun Investments.  Headquartered in Fairfield, NJ, he assembled and built a portfolio of industrial buildings.  He was active in real estate until his death.

He was a passionate reader and was very involved in investing.  Many of his friends would often seek his stock market tips. To this day, there are numerous people grateful for the insights he gave them.

At the age of 64 he developed a love for golf and approached it with his typical passion and determination until he became quite skilled at the game. He also loved to travel, going on a number of adventures around the world with his wife.

In lieu of flowers memorial contributions may be made to: Hawthorne Gospel Church, 2000 State Route 208, Hawthorne, NJ 07506.

Visiting hours at Bradley-Braviak Funeral Home, 49 Whippany Rd. in Whippany, NJ, will be on Wednesday, December 7th from 11:30am to 1:30pm.  Interment will follow at Gate of Heaven Cemetery in East Hanover.