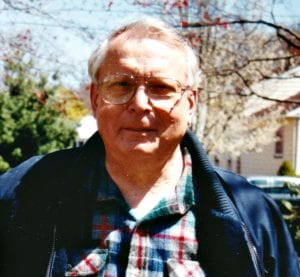 Born in Newark, NJ, Fred was a graduate of Weequahic High School. His interest in radio electronics led him to join the Air National Guard based at Newark Airport, where he served as a radar mechanic. Following activation into the U.S. Air Force in 1951, he served in the 105th Aircraft Control and Warning Squadron stationed at Ernest Harmon AFB in Newfoundland, Canada. On his return home, he was employed at RCA in Harrison, where he met his beloved wife, Eleanor. They eventually settled in Union, where they raised their daughters Jean and Susan.

During his more than 40-year tenure with RCA and its successor companies, Fred worked on technologies for the lunar module which successfully delivered Apollo astronauts to the moon. He later worked in microwave telecommunications for MCI.

At home, Fred was well known in the neighborhood for his annual front yard floral displays, as well as an extensive vegetable garden and strategic defense against marauding squirrels in pursuit of his prized tomatoes. In later years, he supported Eleanor’s passion for backyard birding and volunteered with her to help maintain the bluebird trail at Lenape Park in the Union County Park System. His daughters fondly recall the hours spent with him, working on electronics projects, gardening and photography, as well as the home repair skills he taught them.

Fred was predeceased by Eleanor in 2018 after 63 years of marriage. He is survived by their daughters Jean (of Somerset, NJ) and Susan (of Cranford, NJ) and Susan’s companion Ivan Kossak. In lieu of flowers, the family would appreciate donations to Crossroads of the American Revolution Association (www.revolutionarynj.org/donate ), 101 Barrack Street, Trenton, NJ 08608.