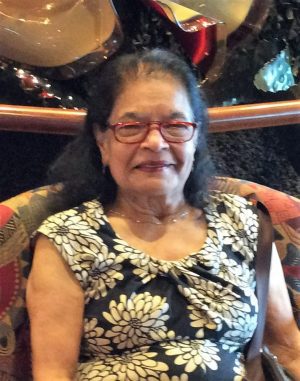 Haimonti Chaudhuri was born July 18, 1928 in Kolkata, India to a traditional family during British rule of India.  Over the years, she saw a huge transition in Indian society.  She witnessed the independence of India, as well as the violence associated with the partition.  She learned kindness from her father who ran soup kitchens for both Hindus and Muslims alike.

In Haimonti’s sheltered family, girls would not receive much of a formal education.  They were expected to marry and raise a family instead.  She married Naba Krishna Chaudhuri in 1949 and arrived in the U.S. in 1954.  They settled in Katonah, NY with two young daughters, both under the age of five.  She did not know anyone, did not speak any English, wore a saree and did not know how to cook.  In 1954, there were very few Indians in the US and she became the object of much curiosity and many pictures.

In 1956, the family moved to Madison, Wisconsin where there was a larger contingent of Indian students.  They taught her how to cook, and to drive a car with manual transmission. Several of them remained life-long friends of hers.

The family moved back to India in 1958 and returned permanently to the US in 1963.  They lived in Worcester, MA, and Ardsley, NY. Haimonti and her husband settled in Chatham, NJ in 2000 to be near their beloved grandchildren Lily and Timothy Wrynn.

After her husband, Naba Krishna, died in 2008, Haimonti became quite self-sufficient and lived independently until her death.  She managed her finances, bought a computer, learned online banking, email and video chatting.  She kept up with her large family and friends through her Facebook account.

Besides her family, the other joy in her life was the Bengali community of New Jersey.  She was a member of Ananda Mandir, ICC and attended all the pujas.  Haimonti was also an active member of the Evergreen Club and the members looked forward to her baked goods and desserts at their monthly meetings.

Haimonti’s life was characterized by strength and resilience. She adapted to living in a quiet NY village after living in the bustling city of Kolkata. She learned English and learned how to navigate American life without much support. Despite having little formal education, she rose to the position of underwriter at Aetna Insurance.  She became an accomplished cook, did beautiful needlepoint, kept up with politics and read the New York Times every day.  She was accepting of all people regardless of race, culture or economic status.  Her motto was to treat people well and they in turn will do right by you.  She loved people and they in turn loved her back.

The family would also like to thank her caregiver, Victoria, and Atlantic Hospice for all the support they have provided over the past few months.