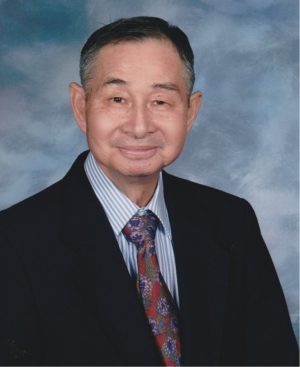 It is with deep sadness and hearts full of love that we share the news of Harry H. Fujimoto’s passing in the quiet of the night on January 30, 2022.  Harry was born into a farming family of 3 brothers and 3 sisters in Montebello, California on September 8, 1928.  They lived in a happy community of Japanese families and friends.  Harry began his education and love for learning at Greenwood Elementary School there.

Life changed suddenly in 1942 after the United States entered into World War II and the issuing of Executive Order Number 9066 by President Roosevelt.  Harry and his family, along with thousands of other Japanese Americans, were removed from their homes leaving all their possessions behind and housed at the Santa Anita Raceway stalls for 3 months and eventually sent to Rohwer Internment Camp in Arkansas.  His family spent many challenging years in the camp but still managed to create lots of  joyful moments and memories together.  After several years the United States government released the families and they were permitted to travel only to the east coast to start a new life. With the aid of the American Red Cross, Harry and his family made their way across the country finally settling in Berkeley Heights, New Jersey.

The family found work as caretakers and workers with the Joas family in New Providence, New Jersey. Harry attended and graduated from Summit High School and went on to graduate from UPSALA College with a major in Physics.  Harry then proudly served in the United States Army for 2 years.  He fought in the Korean War under the 45th infantry division, and was involved in several successful battles.  Harry received the Korean Service Medal with 2 bronze service stars, UN Service Medal, National Defense Service Medal and the Bronze Star Medal.  Harry was a very proud citizen of the USA!

When returning from the Army, family circumstances again changed life’s plan.  Harry and his brother began Carl’s Greenhouses in New Providence, New Jersey growing carnations and chrysanthemums, soon becoming the largest greenhouse growing flowers under glass in New Jersey. After about 30 years when the family greenhouses were sold, Harry went to work at Plessey Dynamics Incorporated as an airplane parts and fabrication department quality control inspector where he continued to work until reaching retirement.

Throughout his life he endured “silent prejudices” but always held the advantages of education and new opportunities as a privilege.  He was a proud member of the New Jersey Farm Bureau, Summit Old Guard, Berkeley Heights VFW,  New Providence Historical Society and St. Andrew’s Episcopal Church.

Harry was a gentle and caring person, intelligent and inquisitive, small in stature and large in love and support, a true and constant friend of many.   He was especially interested in the activities of his acquired family, always teaching the grandchildren lessons through daily play and tasks.  He was a constant presence at school functions, sporting events and never missed an important family milestone.   Harry loved sushi, the challenges of the stock market, soft white bread, the Yankees, miso soup, the football skills of Tom Brady, hotdogs, care and beauty of plants and flowers and hot green weak tea!  Harry was loved by family and friends and will be dearly missed.

Friends are invited to gather together on Saturday, February 5, 2022 between the hours of 9:30 am and 1:00 pm.  We will have a short “Words of Comfort” time and a military presentation at 11:30 at the Bradley Brough & Dangler Funeral Home, 299 Morris Ave. Summit, NJ.