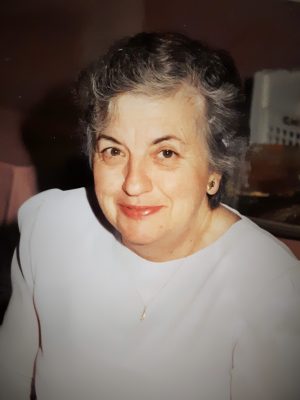 Inez Walling, 93, passed away peacefully in her sleep on December 27, 2021 following a short illness.

Inez was born in Nottingham, England on November 18, 1928 to Edgar and Clara (Wilson) Stubbings. After moving to the United States, she grew up in the Bronx, New York and graduated from Theodore Roosevelt High School. After graduation, she began working in Manhattan at Metropolitan Life Insurance Company, where she met her future husband, Jerry. Together, they moved to Madison, NJ in 1955.

After many years as an amazing stay-at-home-mom and, later, following her retirement from H.P. Higgs & Co. in Madison, she and her late husband enjoyed traveling throughout the country and dancing the night away on many, many cruises. She was a faithful member of the United Methodist Church in Madison where she served in countless ways, including president of the Friendship Club. She was an avid knitter and crafter, enthusiastic singer, and fabulous party-thrower.

She was the devoted wife of the late Jerry Day Walling for more than 64 years.

A special Thank You to all her cherished friends and neighbors who have cared for and supported her so much in recent years.

Funeral Home:
Wm. A. Bradley & Son Funeral Home Visitation Hours:
Friends are invited to visit at the funeral home beginning one hour prior to the memorial service Funeral:
A Memorial Service will be held on Thursday, December 30, 2021 at 1:00 p.m.<Wm. A. Bradley & Son Funeral Home, 345 Main Street, Chatham Memorial Gifts:
In lieu of flowers, donations may be made to the Interfaith Food Pantry, 2 Executive Drive, Morris Plains, NJ 07950 (mcifp.org).