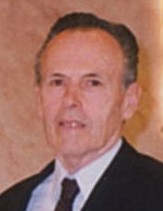 On March 19, 2022, James J. O’Neill, loving husband, devoted father, and long-time resident of Union, NJ, passed away at the age of 84. James died peacefully in the house where he lived for over 70 years with his wife of 62 years by his side.

James was born in September 1937 in Newark, NJ. James moved to Union when he was 8-years-old and attended Union High School where he played on the school’s football team. James proudly served in the U. S. Army from 1955 to 1957 and was happy to regale anyone he met with stories of the time in the service. He then returned to Union where he married the love of his life, Mary (Coulter) O’Neill. James and Mary raised four children, all of whom attended Union High School. James worked for Thompson & Co. in Union for 30 years until his retirement in 1987.

James’ life was marked by serving his local community. When his children were younger, he served as a Cub Scout Master, Little League coach, Pop Warner football coach, and township wrestling coach. For many years, he volunteered at the Runnells Nursing Home. Later in his life and well into his 60s, he volunteered as a Eucharistic Minister, visiting patients in local hospitals, nursing homes, and visiting elderly shut-ins who could not leave their homes.

James’ life was also marked by a desire to help others, whether they be family members, friends, neighbors, or complete strangers. James was someone you could turn to in a time of need, and he was known as someone who would give you the shirt off his back (because on at least one occasion, he actually did). James didn’t just speak of his Christian faith, he lived out that faith in the things he did.

James also had a life-long passion for fitness. For over four decades and well into his 70s, James could be seen everyday walking with his wife from one end of Union to the other, usually sporting his U.S. Army cap.

James is preceded in death by his father, Dennis, his mother, Ann, and his son Jim. He is survived by his wife, Mary, three sons, Dennis, Michael, and Scott, his daughters-in-law Lana, Marilena, and Ann, his nine grandchildren, Jennifer, Kelley, Caroline, Elisabeth, Chris, Tori, Jessica, Christopher, and Kaylie, his four great-grandchildren, Addison, Jax, Luke, and Eleanor, and his sisters-in-law Dotti Finizio and her husband Ernest, Joyce Coulter, and Fran Coulter.