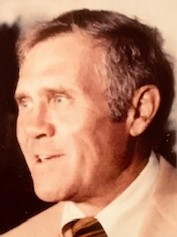 James Richard (“Dick”) Tellson died peacefully on May 13, 2022 at the Center for Hope in Scotch Plains, NJ.

A Mass of Christian Burial will be at 10:00 am on Thursday, May 19, 2022, at Corpus Christi Catholic Church at 234 Southern Blvd., Chatham Township, NJ 07928. Interment will follow at Gate of Heaven Cemetery, East Hanover, NJ.

Born in Orange, NJ on September 20, 1923 to the late Joseph and Esther Tellson, Dick attended Seton Hall Prep and College of the Holy Cross in Worcester, MA.

Dick served in the Army Air Forces in World War II from 1943 until 1945 as a B29 radio operator in the hazardous firebombing raids over Japan. Among other honors, Dick earned the Distinguished Flying Cross medal for his military service. Upon his return from the war, Dick completed his college education and graduated with a B.A. in business administration. He then worked in New York for United Screw and Bolt, Inc. rising to Vice President of the New Jersey branch before his retirement.

Those who knew Dick knew that his passions were golf and classical music. A long-time member of Baltusrol Golf Club, he served on numerous committees and was deeply involved in the organization of U.S.G.A. and PGA events. An avid golfer who was competitive on the links, Dick was also “a true gentleman golfer” stated Bob Ross, a PGA Professional and former Head Pro at Baltusrol. Inside the clubhouse, everyone knew Dick, who was always known to be gracious and courteous toward the Baltusrol staff as well as welcoming to new club members.

Dick became a lifelong fan of opera after seeing the 1936 movie “San Francisco”, and he regularly attended performances at the Metropolitan Opera House in New York for more than six decades. He passed on his love of opera to many members of the family who continue to love it as he did. He was also an avid supporter of the New Jersey Symphony in Newark, NJ.

Memorial donations may be made to Corpus Christi Church , the New Jersey Symphony , or the Center for Hope .

Funeral Home:
Wm. A. Bradley & Son Funeral Home Funeral:
A Mass of Christian Burial will be at 10:00 am on Thursday, May 19, 2022, at Corpus Christi Catholic Church at 234 Southern Blvd., Chatham Township, NJ 07928. Committal:
Interment will follow at Gate of Heaven Cemetery, East Hanover, NJ. Memorial Gifts:
Memorial donations may be made to Corpus Christi Church (https://corpuschristi.org/), the New Jersey Symphony (https://www.njsymphony.org/support/make-a-gift), or the Center for Hope (https://www.cfhh.org/donate.html).