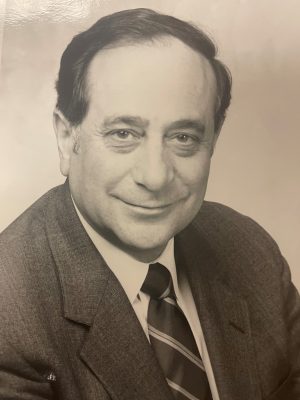 It is with heavy hearts that we announce the passing of James Vincent Tino, Sr. on January 6, 2023, with his loving family by his side.  Born in 1933, he attended Kearny Public Schools where he enjoyed playing football.  He then settled in Union, NJ marrying the former Elaine Claire Walsh.  He was a self-made businessman who worked his way up from the auto dealership parts department, to eventually founding Multi Chevrolet in Union.  Jim operated Multi Chevrolet for 47 years, and during that time also opened Multi Subaru, before his retirement in 2016.

A “True Human Being”, Jim was a former member of the Knights of Columbus in Union, The Optimist Club in Union, past Chairman of the New Jersey Coalition of Automotive Retailers, and  recipient of the Phil Portney Humanitarian of the Year Award.

Jim lived a full life that revolved around putting others first, always making sure everyone around him was taken care of.   When not at the dealership, he especially liked following Giants football, boating, fishing, church, and dinner nights with his close companions-he valued their company immensely.  First and foremost, he loved spending time at his summer house at the Jersey Shore in Lavallette.  There he kept the grandkids entertained and their bellies full.  They especially loved the Sunday morning runs with Pop-Pop to the bakery, for donuts in pajamas.

Jim was predeceased by his loving wife of 57 years, Elaine, his parents Vincent James and Anna, his brother Carmen, and sisters Anne Michaels and Susan Arlotta.  He is survived by his brother Robert and wife Justine, daughter Valerie Motylewski and husband Mark,  son James V. Tino, Jr. and wife Juliann, and grandchildren Amy Heller and husband Ben, Kevin Motylewski, Caroline Smet and husband Michael, Grace Tino, and Ava Tino.  Also survived by close friend Jill Watkins, and many nieces and nephews.   In lieu of flowers, donations to the Newark Day Center Fresh Air Fund, Newark, NJ at newarkdaycenter.org would be sincerely appreciated.