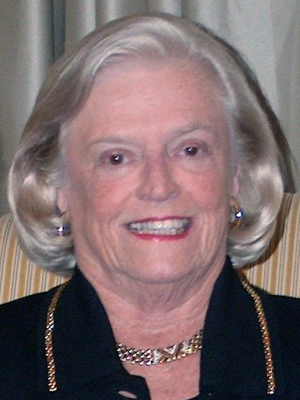 Janet Mellen Shearer Johnson died peacefully on April 13, 2020, at the age of 93, in Basking Ridge, NJ. She was a beloved mother, grandmother, and great-grandmother.

The cause of death was complications of the Coronavirus.

She was born on June 8, 1926, in New York City. She was the daughter of Ethel Donnelly Mellen and Arthur William Mellen, Jr. She graduated from Scarsdale High School and Connecticut College.

Janet married Ralph Lassell Shearer, Jr. in 1948, and together they raised their five children in Madison, New Jersey. Her career as a realtor started in 1968 with the Country Agency Real Estate Company. She later worked with Faye Fischer Realtors and Burgdorff Realtors, until she retired in 1991. She lived in Bay Head, New Jersey, starting in1991, after the death of her first husband, Ralph.

She married Edward Fuller Johnson in 1993. She moved from Bay Head to Fellowship Village in Basking Ridge in 2012.

She was an avid tennis player at the Noe Pond Club and in later years at the Bay Head Yacht Club. She was a member of the Junior League of Morristown. She volunteered at Morristown Memorial Hospital, Coastal Caregivers and other community groups. One of her favorite memories was participating as a dancer of the Can-Can, the highland fling and other dances in the Junior League’s “Let Yourself Go Follies of 1959.” She loved dancing – she dreamt about joining the Rockettes as a teen, and loved aerobics dancing and ballroom dancing later in life.

Funeral Home:
Wm. A. Bradley & Son Funeral Home Funeral:
In light of the restrictions surrounding the Coronavirus pandemic, the family is delaying memorial services until such time the precautionary measures and guidelines in social gathering are lifted.   Please hold Janet, as well as her family, in your prayers and hearts until we can gather to celebrate her life. Memorial Gifts:
Those wishing to do so may make a memorial donation to Make a Wish New Jersey, 1384 Perrineville Road, Monroe Township, NJ 08831.