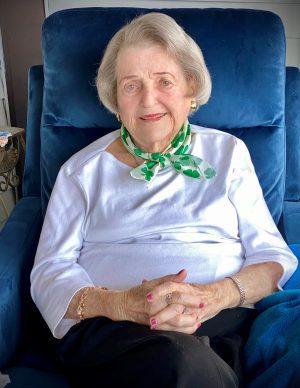 Joan Mary (Cahill) Schaefer, 91, passed away peacefully on July 27, 2022. She was born on March 20, 1931, in Oak Park, Illinois, to John and Elsie Cahill. She attended Arlington High School in Arlington Heights, Illinois, and she was graduated in 1948, at 17 years old. She attended Mundelein College on a full scholarship, where she commuted two hours each way and was taught by Sisters of Charity of the blessed Virgin Mary nuns.  She double-majored in British and American history and was graduated in 1952.

For several years, Joan worked for business consulting firm Frye and Associates in Chicago while attending business school. She met the love of her life, Raymond F. Schaefer, at a Catholic University Club event in October 1954. The two married Nov. 5, 1955, at Our Lady of the Wayside in Arlington Heights.  They spent their wedding night at The Drake Hotel before honeymooning at The Essex in New York City and The Reefs in Bermuda.

Joan and Ray moved into their first apartment together in Chicago. Their first child, Thomas Raymond, was born Aug. 23, 1956. Joan and Ray then moved into a red brick ranch house at 1307 N. Mitchell Avenue in Arlington Heights, and welcomed their second child, Susan (Maggie), on Nov. 3, 1957.  Next came John who was born on Feb. 26, 1963, and the family of five moved to 116 E. Sibley Street in nearby Park Ridge.  On May 6, 1965, their youngest child, Marianne was born.

Joan was a leader in Cook County Girl Scouts and worked at the Park Ridge Country Club as a receptionist. She enjoyed taking family vacations, including trips to Colorado, Santa Fe, The Rockies, the 1967 International and Universal Exposition (Expo 67) in Montreal and many others. She doted on the family dog, Lady.

A new job opportunity for Ray brought the Schaefers to Lenexa, Kansas, in 1973, where Joan quickly became active in the community, lectoring at Good Shepherd Catholic Church and serving as president of the Women’s Republican Club of Lenexa, executive board member of the Lenexa Historical Society, community chairperson of the Girl Scouts, advisory board member of Shawnee Mission Northwest High School and on the Shawnee Mission special education advisory board.

Honoring her interest in entertaining and fine dining, Joan worked in the fine china department of Stix Baer & Fuller in the late 70s.  She lost the love of her life too soon, when Ray passed away in 1985. Despite the hardship, Joan answered the call of party officials to run for state representative in Kansas the following year.  She also worked as an office manager for Chuck Weber, CPA, was a member of Pilot International and served in the Kansas Silver Haired Legislature. Her dog, Kelly, was a constant companion.

Joan lost her mother, Elsie, in 1989, and her son, John, in 1990. In 2000, she moved to the Clearbrook Adult Community in Monroe Township, New Jersey. There, she was on the board and involved with the local church. She moved to independent living at nearby Monroe Village in 2014. In July of 2022, she moved to Juniper Village in Chatham to be closer to family.

Joan relished acquiring knowledge in all forms. She loved history, reading, grammar, global travel, Republican politics and antiquing with The Questers International. She enjoyed throwing dinner parties and celebrating holidays, especially Saint Patrick’s Day, Easter and the Fourth of July. She favored Creole recipes, frequently served Beef Wellington around the holidays, and loved a good cup of Irish coffee. She built her life with a focus on family, faith and food.

Always curious about other people and countries, Joan continued to travel frequently even in her later years, visiting Ireland, England, Greece, Russia, Bahrain and other far-off destinations.

Visiting hours at Wm. A. Bradley & Son Funeral Home, 345 Main St. in Chatham will be on Friday from 4 to 7 p.m. A funeral mass and burial in Lenexa, Kansas, will be announced at a later date. In lieu of flowers, please consider donating to the Muscular Dystrophy Association or FACES (Finding a Cure for Epilepsy and Seizures).

Funeral Home:
Wm. A. Bradley & Son Funeral Home Visitation Hours:
Wm. A. Bradley & Son Funeral Home, 345 Main St., Chatham, NJ, on Friday, July 29, 2022, from 4:00 p.m. to 7:00 p.m. Funeral:
A funeral mass and burial in Lenexa, Kansas will be announced at a later date. Memorial Gifts:
In lieu of flowers, please consider donating to the Muscular Dystrophy Association or FACES (Finding a Cure for Epilepsy and Seizures).