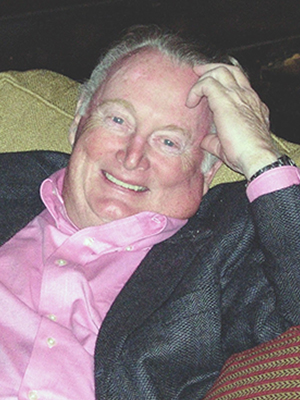 John Joseph Cranley, Jr. “Jack”, 83, of Summit , NJ passed away peacefully with his family by his side on October 26, 2019. A Mass of Christian Burial will be celebrated at St. Teresa of Avila Church, 306 Morris Ave. in Summit on Wednesday, October 30 at 9:30am. Entombment will follow at St. Teresa Cemetery. Friends are invited to visit at Wm. A. Bradley & Son Funeral Home 345 Main St. in Chatham on Tuesday from 4 to 8pm. There will be words of remembrance at 7pm during the visitation.

Born in Brooklyn, the son of John and Elizabeth (O’Neill) Cranley, Jack was raised in Elizabeth. He attended St. Genevieve School and Church where he served as an altar boy and graduated from Jefferson High School in Elizabeth. Upon graduating from Villanova University, Jack went directly to the Wall Street firm of Dreyfus & Co. where at the age of thirty he became a partner. He remained there throughout his career and went on to become managing partner. At the time of his retirement, the firm had offices in N.Y.C., NJ, Colorado, Florida, Dublin, Ireland and Paris, France. Jack had a summer home in Normandy Beach where he and his family loved to go. He enjoyed playing tennis there, especially in the Normandy Beach Tennis Tournaments and served as president of the Normandy Beach Improvement Association. A member of Canoe Brook Country Club, the Normandy Beach Yacht Club and the Bay Head Yacht Club, Jack also enjoyed golf and skiing. He and his family spent numerous weekends skiing in Vermont and out west. He also skied the Glacier at Mont Blanc in the French Alps.

Jack was the beloved husband of 57 years to Dolores. He was the loving father of John Cranley, III, Karen Feldkamp and her husband Steve, and Dr. Robert Cranley and his wife Susan. He is also survived by his cherished grandchildren, Caroline, Teddy, Jack, Liam, Tucker, Katherine, Thomas, Cameron, Declan and Bevin and his dear sister, Anna Mae Magnier. He is predeceased by his brother William Cranley. In lieu of flowers, donations in Jack’s memory may be made to the Lewy Body Dementia Association at LBDA, 912 Killian Rd. S.W., Lilburn, GA 30047

Funeral Home:
Wm. A. Bradley & Son Funeral Home Visitation Hours:
Wm. A. Bradley & Son Funeral Home 345 Main St. in Chatham on Tuesday, October 29, 2019 from 4:00pm to 8:00pm. There will be words of remembrance at 7pm during the visitation. Funeral:
St. Teresa of Avila Church, 306 Morris Ave. in Summit on Wednesday, October 30th at 9:30am. Committal:
Following Mass at St. Teresa Cemetery, 136 Passaic Ave., Summit, NJ following Mass Memorial Gifts:
In lieu of flowers, donations in Jack’s memory may be made to the Lewy Body Dementia Association at LBDA, 912 Killian Rd. S.W., Lilburn, GA 30047