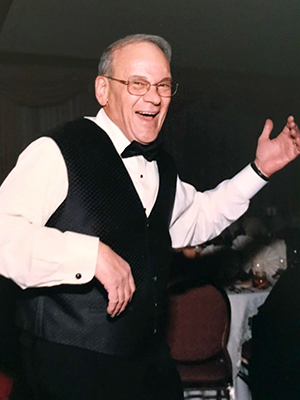 John Joseph Terzani of Wildwood Crest, New Jersey, and formerly of Mahopac NY passed away on December 8, 2019 at the age 79.  John was born in Brooklyn New York to Athos “Bruno” Terzani and Matilda Terzani and brother of Tina, Lena and Joy.

John was a resident of Mahopac, NY for the majority of his life. He was a Salesman with Masland Carpets for 46 years before his retirement at age 78.

John was the consummate gentleman. He was known for his kindness, generosity, and exceptionally good manners.  He was a valued counselor, mentor and role model for many, especially those in his family including his children, grandchildren and sons-in-law.  He was loved by his many co-workers and customers alike.  He was also an avid reader, tennis player and connoisseur of fine (and casual) dining. He was the ultimate host and always the life of every family party.

He always had a bright and cheerful disposition and always looked for the good in everyone.  He touched many lives while he was with us and his influence will continue to shape future generations of his family.

John died after battling cancer for the past 9 months.  A private memorial service will be held to celebrate John’s life, details will be communicated soon. If you would like to commemorate John’s memory, please make a donation to the American Cancer Society.