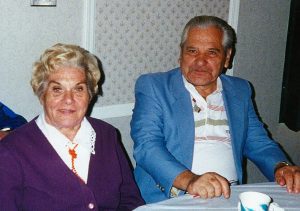 John Mayer, a long-time resident of Union, passed away at Hackettstown Medical Center on August 30, 2022.  He was 97.

Born in Obrovac, Yugoslavia to the late Nicolaus and Eva Mayer, John immigrated to the United States in the early 1950’s and settled in Irvington.  He had his own tailor shop there- “John’s Tailor Shop” and married his beloved wife, Anita, on November 8, 1959.  In the late 1960’s, he and Anita moved to Union where he became a Department Manager of the A&P Grocery Store.

John loved to garden, having all kinds of fruit and vegetable plants and trees in his backyard.  He would then create various jellies, jams and preserves to enjoy for the winter months.  He was also an active, life-time member of the Deutscher Club of Clark.

He was the beloved husband of the late Anita and the cherished brother of the late Thereisa Jelinek.  He is survived by his nephew, Nikolaus Jelinek, great-nephew, Andreas Jelinek and great-niece, Susanne Leupoldt and her family.  They all reside in the Munich, Germany area.

Funeral Home:
Bradley, Haeberle & Barth Funeral Home Funeral:
A chapel service will be held at Hollywood Memorial Park Mausoleum, Stuyvesant Avenue in Union on Friday, September 2, 2022 at 10:00 a.m. Memorial Gifts:
Those who wish may contribute in his memory to the Deutscher Club of Clark, 787 Featherbed Ln, Clark, New Jersey 07066