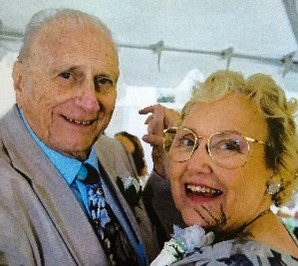 Joseph Richard May, “Joe”, 94, formerly of Chatham, NJ, passed away of natural causes on July 26, 2020. He was at the home of his son David in Corona, CA where he moved recently after losing vision in one eye.  He is reunited in Heaven with Martha Jane (Billhardt) May, his wife of 50 years who passed away in 2009.

Born in Ridgewood, NJ to bridge designer Joseph Otto and Marcella Mary (Urell) May on June 29, 1926, he was the youngest of three. After graduating from Ridgewood High School in 1944 during WWII, Joe joined the Army Air Corps. He was in airplane mechanic school when the war ended but his service did not. He was assigned to the 9th Air Force as part of the Army of Occupation in Germany. In a bout of extreme good fortune, Joe’s best friend Dave Gunster was a shipmate on the Texarkana Victory as they sailed to France. They were selected as MPs for the voyage, shared the same box car with 34 others across France, and were both assigned to Hanau Air Depot where they roomed together. Designated as a Courier, Joe drove an official mail Jeep to Frankfurt twice a day. His favorite European and Service experience was a two-week train tour through the Swiss Alps to Rome. He also entertained himself and others by sketching caricatures and cartoons of his superiors and fellow servicemen and the sketches survive to this day. Joe’s brother Edwin served in the Navy during World War II and one of the happiest days of their parents’ lives was when both their sons youreturned home safely on the same day in August 1946.

Joseph utilized his GI Bill and natural art talent to earn his B.F.A. in Industrial Design from Rhode Island School of Design. He enjoyed an interesting career designing a variety of products from medical and restaurant equipment to bicycles and lawn mower wheels. He is listed as the lead or co-inventor on eleven patents including as the lead on at least three design patents. Two of these design patents are for an innovative wheelchair wheel design. Other products to his credit include electrical appliances, projects for Thermos Co., home furnishings, plastic wheels for mowers, carts, portable soccer goals and more, a Christmas tree stand, dozens of automobile parts, office chairs, re-design of a child booster seat, and many more.

His employers included Becton Dickinson in East Rutherford, NJ with his brother, Gerschen Industrial Design in Maplewood, NJ, WearEver Division of Alcoa in Pittsburgh, PA, Bolta Products Division of General Tire and Rubber Co. in Lawrence, MA, Ace Products in Butler, NJ, and Allied-Signal in Morristown, NJ. While Joe retired in 1992, he continued working as a consultant for another 10 years.

Along with the great joy his family and friends brought him, one of Joe’s happiest memories was the six-month honeymoon he took with Martha around the United States in early 1959. Their adventure included skiing in New England, towing their boat to cruise waterways of southeastern states, and camping in majestic parks throughout the country. Friends and family sat through many a slide show upon their return.

Leading by example he instilled a strong sense of responsibility for family, respect for all people, and love of the outdoors. He took his family camping, fishing, hiking, boating, and exploring local & national parks and historic sites. He loved classic car and air shows, Revolutionary War re-enactments, Dixieland jazz and Big Band music, dabbling in photography, and more. He enjoyed boating and water skiing especially on Lake Mohawk in NJ. His favorite place to eat was any restaurant with a view of a marina.

Jovial and good-natured, Joe was very social, loved a party, and met frequently with friends and former colleagues. Throughout his life, he was active with many groups from Hi-Y in high school and Mount Carmel Club as a young adult through to the American Legion in recent years. He was a long time member of the Industrial Designers Society of America, Society of Plastics Engineers, Knights of Columbus (K of C), and more. Around the time of the Nation’s Bicentennial, he joined the Chatham Colonial Rifles and later recruited his family to participate. Son David and Joe played the role of Minute Men complete with firing replica flint-lock rifles. Joe participated in causes including as a founding member of the Recycling Committee of the Chathams and the revitalization of Memorial Park Pool. Also in his retirement, he was a regular at The Senior Club of the Chathams, the Senior Center, a weekly breakfast with fellow elders mostly from St. Patrick’s Church, and a monthly lunch with his brother and decades-old friends.

It can take a village for an elderly widow/er to remain in their home for several years. Joe’s children are eternally grateful to the extended family, caring neighbors, friends, K of C Brothers, Health and Caring Ministers of St. Patrick’s Church, former colleagues, acquaintances, and more who enriched his life for more than a decade. Also, the family wishes to thank aide Elvia Martines for her companionship to Joe and her tremendous help through this difficult time.

Joseph is survived by son David, daughter Virginia and son-in-law Edward Klimasauskas, David’s step-daughter Ebony Edwards, husband Jeff, their son Ezra, and David’s son Matthew. He was a beloved “Uncle Joey” to many nieces, nephews, and extended family. He was preceded in death by his parents, his wife Martha, his older brother Edwin in 2003, and his oldest sibling, sister Marion Nugent in 2007.

The family of Joseph R. May invites you to a Celebration of Life for Joe who passed away July 26, 2020. Please join us at the wake on Friday, June 24, 2022 from 4 to 6 pm at Wm. A. Bradley & Son Funeral Home, 345 Main St. Chatham, NJ and or the funeral on June 25, 2022 at 10 am at St. Patrick’s Church, 85 Washington Ave. Chatham, NJ. David and Ginger hope you will share memories of their father as well as their mother, Martha, who passed away in 2009. To attend the repast or send the family a condolence, please visit, www.bradleyufneralhomes.com.His final resting place will be with Martha at Fort Rosecrans National Cemetery in San Diego, CA. For more and to leave a message, please visit Thomasmillermortuary.com. In lieu of flowers, please consider donating to your local food bank or homeless shelter, The Salvation Army, St. Joseph’s School for the Blind, American Macular Degeneration Foundation, or Alzheimer’s Association.