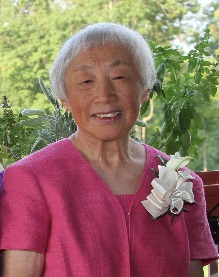 Juliana Chang died of Alzheimer’s disease on December 4, 2019 at the age of 86. Juliana completed her high school education at Maryknoll School in Hong Kong. She graduated from Taiwan Normal University in 1957 where she was top in her class and was chosen to teach English at the Middle School affiliated with the University. Juliana came to the U.S. in 1959 to pursue higher education where she earned two master’s degrees – one from Southern Illinois and the other from University of Pittsburgh. After graduation, Juliana worked as a children’s librarian in West Orange, NJ and then as cataloger of Chinese and Korean books at both Smith College and Amherst College.

Juliana was a kind and gentle soul loved by many and will be greatly missed. She was an astute observer of people, an accomplished Chinese cook, and had a green thumb that could grow any plant. She loved to sew and knit and sit in a sunny corner with a good book. Above all, her love for her family and the tender loving care she provided will be her everlasting legacy. She is survived by her husband of 56 years, Gerald and her twin daughters, JoAnn and Jessalyn.