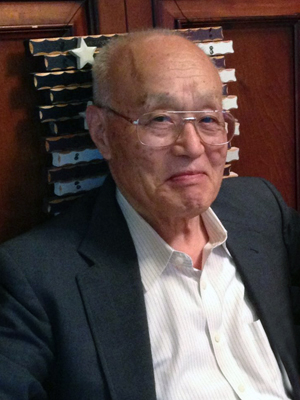 Kenichi Suzuki passed away on a bright sunny morning February 19, 2020 at the age of 86. He is survived by his son (Benjamin), daughter in law (Kirsten) and four grandchildren (Ben Jr., Joshua, Daniel and David). He is remembered for his commitment to family, integrity, honesty, love of aikido, Go (Japanese Chess), love of nature and his incredible generosity.

Kenichi was born in Tokyo to his father (Seisaburo) and mother (Kikuyo) in 1934 along with his brothers (Kazukuni, Hozo, and Hisayoshi) and sisters (Sieko and Sayoko). As part of a centuries long noble samurai family heritage and tradition, his family was very kind, patriotic, traditional and supportive of Japan’s ideals and customs. Kenichi was 11 years old when World War II ended and many of those ideals came at odds with new western ideas that came with post war reconstruction and emerging American influence. Along with so many other young people at the time, Kenichi did not see an enemy, but rather embraced American ingenuity, ideas, music, language, and so many aspects of what he believed was a blessed and amazing culture. Inspired by American inventors, at 12 years old, he built a working radio out of scraps in his dad’s garage. As a high school student, Kenichi pushed himself very hard, competing academically and athletically to a point that his family worried for his lack of sleep. His world radically changed when he was diagnosed with Tuberculosis which became his first of several huge challenges to overcome as only a few survived in Japan during that time. Having survived, he developed an inner strength that would help him later in life.

After completing his studies at Gakushuin University, Kenichi started his career working for our family insurance, hotel and trucking companies, however it didn’t take long for the conflicting western ideals to become at odds with the more traditional Japanese cultural norms of our family patriarchy. Eventually Kenichi decided to leave Japan and come to America where he could freely pursue his dreams. Kenichi enrolled in Graduate School at the University of California Berkeley, where he met his first wife, Joan Little who was a student in his Aikido Dojo. After a two-year courtship they married, had a son (Benjamin) and agreed to return to Japan so Kenichi could complete his law degree and start an international law practice. After five years, things didn’t work out and Kenichi faced his next big challenge of returning to America and starting over. He was all in, became a proud US Citizen and found success in developing a Japanese health food import company and eventually opened his own real estate brokerage, but after the recession in the early 1990s he struggled to regain lost ground and spent most of his time trying to come up with new ideas while mentoring and guiding his teenage son. Following his family values, Kenichi encouraged core principals like honor, integrity, personal accountability and always reinforced the importance of study and education.

After years of trying to make his real estate practice work in New Jersey, with arthritis and other health challenges mounting, Kenichi decided to return to sunny California and rekindle his love of the golden state’s warm/dry weather and start another chapter. He eventually met his late wife (Virginia) and enjoyed many great late-in-life experiences and travels, but it didn’t take long for new challenges as they both faced two different cancers, which eventually overtook his beloved wife in 2011. After four years of staying close to his life and memories of Virginia, he was now ready for his final chapter and returned to New Jersey to spend time with his grandchildren. He would visit often and bring cakes and pastries, tell stories of Japan and teach his grandchildren about respect and integrity. His grandchildren loved the rotating one-on-one Saturday breakfasts at the diner with Ojiisan (grandpa) and he will always be remembered for bringing his unique personality and ideas to conversations, but above all for his commitment and love of family and his generosity towards others.