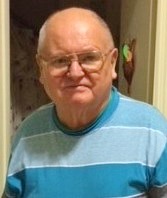 Born in Jersey City, the son of Arthur and Loretta (Williamson) Darragh, Ken was raised in Hoboken and attended William L. Dickinson High School in Jersey City. He worked for 25 years at the American Shuffleboard Company and another 24 years for the Union City Board of Education. He enjoyed watching football and playing pool and will be fondly remembered as a loving husband, father, grandfather and brother who loved telling jokes and stories.

Ken was the beloved husband of 42 years to Claudia.  He was the loving father of Frank and his wife Michelle, and Keith and his wife Mini.  He is also survived by his cherished grandchildren, Naisha, Frankie and Jude; his dear sisters, Gail, Eileen, Jeannie, Patsy and Rosie; and his dear brother Michael.