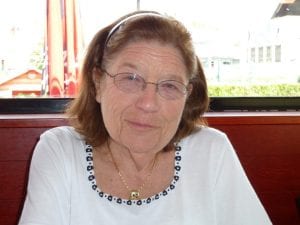 Liliane “mom” was born on June 3, 1930 in Seraing, Belgium. She met her husband of 66 years, Andre, in the shore town of Ostende. They had three children in Belgium and six months pregnant with their fourth child, immigrated to the United States in 1967. When she immigrated, she had no support, no internet, no google maps, no luxury of daily phone calls, snaps, texts or emails back home; she was a woman before her time! She was so proud of becoming a naturalized citizen and was determined each year to exercise her right to vote. She was a consistent blood donor with the American Red Cross and volunteered at the local school libraries whenever possible while raising four young children and a menagerie of animals (domesticated or wild, she helped all creatures big or small).

Mom had a “joie de vivre” that no one can surpass. Those who knew her, always said she had such a cheerful disposition and loved to laugh. She was the kindest, most generous person and she was humble. She lit up every room she walked into. A traditional housewife, she kept an immaculate household, served restaurant quality meals and made sure everyone’s needs were taken care of (always thinking of others and their happiness, above her own at times). She was a dedicated wife, mother and grandmother (known as “Nany” to her grandchildren) who was always on the move. She never sat still and often had more energy than her children and grandchildren.  She set the bar high when it comes to being a wife, mother, “Nany” and overall human being.  We are blessed to have had this beautiful person be our mother, and to quote our father “Marrying mom was the best decision I ever made.”

As we were growing up, she travelled back to Belgium every summer along, with four children in tow (starting that first summer with children ranging in age from 6 mos. to 9 years). This gave us the unique opportunity to enjoy precious moments, delicious meals and laughter with our grandparents, aunts, uncles, cousins and dear friends. She would drive a huge Buick Electra through the small cobblestone streets of Belgium. Amazingly, she was able to parallel park that boat in the small narrow streets. Our family in Belgium mourns her loss but also celebrates the life of a beautiful aunt, cousin and friend.

Liliane is survived by her husband Andre, her brother-in-law Raymond, her children Walter and wife Edilma, Patrick and his wife Helen and daughters Christine and Nancy.  “Nany” is also survived by her grandchildren Sarah, Julie, Alec and Jacqueline.