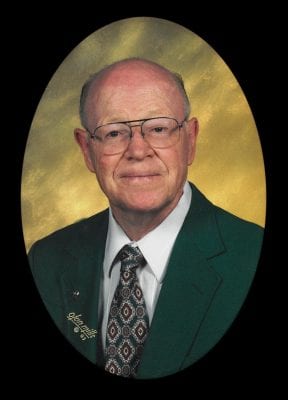 Mal was fond of Dixieland and big band music, reading about history (especially the Civil War), doing at-home handyman tasks, trying new foods, shooting baskets in the driveway for hours on end, dancing with his wife, and nibbling on peanut brittle (which was a guaranteed gift from every member of the family on his birthday and Christmas.)  If you were his friend—and everyone was—there wasn’t a thing that he wouldn’t do for you.  He was the most down-to-earth person; an honest, caring, hardworking, and genuinely funny man, his understated humor often coming out of left field with a twinkle in his eye.  He enhanced the life of everyone who spent time with him.

He was born on February 11, 1928 in Orange, NJ to his father Sidney William Kitson, an engineer, and Josephine Frona Kitson (née Malcolm), a professional singer, pianist and vaudevillian.  He grew up in his beloved Maplewood, NJ, attending Morrow Memorial Methodist Church and graduated in 1946 from Columbia High School.  He remained close friends with his high school buddies for the remainder of their lives.  After high school, Mr. Kitson enlisted in the Army, serving his two years in Japan doing mostly railroad reconstruction and seeing the country; he always felt that he was very fortunate to have had such an educational and rewarding military experience.  Returning to the states, he attended Virginia Polytechnic Institute on the G.I. Bill and graduated with a BS in Management in 1952.  During his time there in Blacksburg, VA, he met and became engaged to his wife Margaret Joyce (née Caldwell.)  They were married at the Morrow Church in Maplewood on February 21, 1953.

After college, he began his banking career in New York City, first at Bankers Trust for a year and then with Citibank, where he worked first in mortgage lending and then for the bulk of his time there in the Real Estate Industries Division, originating large commercial loans for office buildings and shopping centers around the country.  He retired from his position of Vice President at Citibank in 1988, after thirty-five years of service.  Soon after retirement, he was invited to become a member of the Board of Directors at the Dime Savings Bank of Williamsburg in Brooklyn, and was very proud of his time of work and camaraderie there.

Always an active church member, he and his wife joined the Chatham United Methodist Church in 1965 upon their move to Chatham Township, where they raised their family and lived for fifty years.  While at the church in Chatham, Mal served on every committee several times, including heading up the Trustees and Memorial Fund.  His favorite role at the church was being an usher with his wife and greeting his fellow congregants on Sunday mornings with a smile and funny quips.  His other happy public service endeavor was being a decades-long member of the Chatham-Madison Kiwanis Club.  He enjoyed his time as President of the Club, and especially enjoyed marching with the Club in the Chatham 4th of July parades.

Mr. Kitson was predeceased by his beloved brothers Ralph William Kitson and Sydney Edward Kitson, by his first grandson, Douglas Malcolm Rillo, and his daughter-in-law Aleksandra Fedora Kitson (née Rogic).  He is survived by his loving wife, Joyce, of 67 years, his son Thomas Emery Kitson of Madison, his daughter Beverly Joyce Paolella of Chatham Township, and his three beloved grandchildren, Christy Nichole Rillo of Gillette, Evan Thomas Kitson of Lancaster, Pennsylvania and Ryan Aleksandr Kitson of Hillside.  He leaves dozens of loving nieces, nephews and in-laws on both sides of his family.