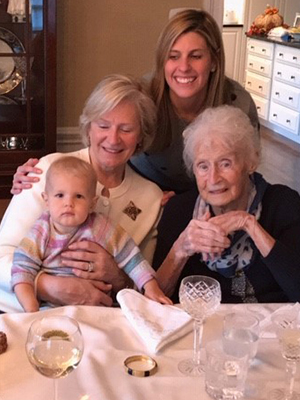 Marie J. Rice, 94, of the Green Village section of Chatham Township, the wife of the late Daniel Charles Rice, passed away peacefully on Wednesday, Dec. 4, 2019, at Overlook Medical Center, Summit, after a brief illness. She was born in Flushing, N.Y., on Dec. 27, 1924, the daughter of Francis and Martha Murray.

As a young girl, Marie would travel with her family from New York City to visit her uncle’s family in Green Village, where she met her future husband, Daniel. After the war, Marie and Daniel were married and built their home in Green Village, where they lived their entire lives. Marie was predeceased by her beloved husband of 69 years, Daniel; as well as her brothers, Francis and Joseph Murray. She leaves behind her daughter, Diane, and son-in-law Carl Spalding of Naples, Fla., her son Frederick Rice of Green Village, and her daughter Elaine and son-in-law Stephen True of Darien, Conn. She is also survived by seven grandchildren, Tracey, Carl, Greg, Daniel, Lindsay, Jason and Jessica, as well as 11 great-grandchildren. Marie will forever live on in the hearts of her treasured children and grandchildren, whom she cherished, and all those fortunate enough to have known her.