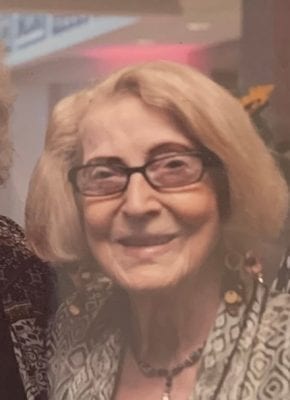 Mary Willene Hood passed away comfortably on December 10, 2019 at Seashore Gardens Living Center in Galloway, New Jersey surrounded by family, friends, and Seashore Gardens’ staff who she loved and who loved her.

Mary married Paul Fudicker Hood, the oldest child of Walter Lavorgia Hood (d. 1961) and Ora (Wright) Hood (d. circa 1985), in 1953. They lived in Camden, Arkansas for a short while and, during the first year of their marriage, moved to Chicago, Illinois where they had three children. In 1960, Mary, Paul, and their three daughters relocated to Ridgewood, New Jersey. When Paul retired from International Paper Company, where he worked for over 30 years, he and Mary moved to Hamlin, Pennsylvania. They enjoyed the pace of life in the Poconos and the opportunity to get to know each other again.

Paul passed away on April 21, 2005 after a year-long struggle with pancreatic cancer. Following his death, Mary moved to southern New Jersey to live with her oldest daughter and to be closer to her other two children. For the last seven years of her life, Mary resided at Seashore Gardens Living Center where she served as the President of the Residents’ Council, met new friends, and enjoyed bingo and baking. Mary loved her family, took great pride in her children’s accomplishments, and couldn’t think of any better way to spend an afternoon than singing and dancing with her eleven grandchildren and great grandchildren. Throughout her life, those who knew her remarked at Mary’s beauty, sense of humor, intelligence, and generosity. She left an impact wherever she went, and she is surely missed.