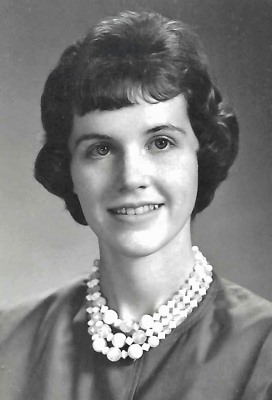 Melda Jean Shippey Pike, a teacher, storyteller, and historian, died on May 3 in Harwich, MA, after a courageous battle with cancer. She was 80.

Melda was born on September 1, 1941, in Schenectady, NY, and grew up in Madison, NJ. Her father was a professor at Drew University and a Methodist minister, and her mother was a genealogist, artist, and substitute teacher. Melda received a bachelor of arts degree in elementary education from Ohio Wesleyan University in 1963. Highlights of her college days included homecoming football games, Alpha Chi Omega sorority, the Bill Street Methodist Church, and making lifelong friends.

In August 1963, she married her college sweetheart, Dave Pike, in Madison. The couple moved to Bergen County, NJ, and Melda taught fourth grade in New Milford for five years. After having two children and moving to Chatham, NJ, she decided to return to teaching in 1976. She wanted to help children who were struggling in school, so she received a certification in special education and a master’s degree in special education/learning disabilities at Kean University. She taught reading, writing, and creative expression to elementary and middle school children for 29 years.

Melda’s expertise as an educator led to several leadership roles in her beloved community of Chatham. She served as president of the Association of Chatham Teachers for two years and was an instructor of a staff development course at Chatham Middle School. She also led programs for parents.

History was a passion of Melda’s. She served as president of the Chatham Antiques Club and historian for the Chatham Historical Society. She was also a member of the Madison Historical Society and, like her mother, took an interest in genealogy. After she retired from teaching, she wrote a book called “Corn Tassel Memories,” which is filled with stories and photos that celebrate life on her grandfather’s Nebraska farm in the early 1950s. She gave copies to each of her grandchildren.

The Chatham United Methodist Church was an important part of Melda’s life. She was a member of the Missions Committee and the Rebecca Circle, and she used her teaching expertise to lead Bible study groups and a discussion group for parents.

Despite her busy life, Melda took the time for creative pursuits, such as sewing, craftwork, needlework, and quilting. She made doll clothes and bears of all sizes and created beautiful quilts and wall hangings. Her whimsical and colorful quilts will be forever cherished by her children and grandchildren. Melda’s parting gifts to friends and family members, just days before she passed, were tiny bears in brightly colored fabrics.

Travel was another interest of Melda’s. She took a cross-country trip with Dave, as well as vacations to Hawaii, Florida, Alaska, Austria, England, France, and Aruba. In 1960, when she was in college, she crossed the Atlantic Ocean on the SS Rotterdam. She shared many interesting stories about her travels, including a chance meeting with Elvis’s mother in Memphis in the 1950s. Her favorite destination, however, was Cape Cod, where she chose to spend the last months of her life.

At the Cape, Melda was active in the Rising Tide Writer’s group. She wrote many stories about her life as well as the lives of relatives. Her last Christmas gifts to her grandchildren and children were personalized scrapbooks, which were filled with photos and information about relatives.

Melda cherished her time with her grandchildren. She taught them how to bake, sew, and play the piano, and she entertained them with many stories. She supported their music lessons and babysat frequently. Even after she became ill, Melda continued to bake cookies for her grandchildren and other family members.

For entertainment, Melda turned to NASCAR. She was at the Daytona 500 the day Dale Earnhardt, her favorite race car driver, died. A few of her favorite movies were “The Sound of Music,” “My Cousin Vinny,” and “Hidden Figures.” Favorite TV shows included “Finding Your Roots,” “Swamp People,” “Love It or List It,” and “Chronicle,” a show about life in New England.

Melda is survived by Dave; a daughter, Debbie; a son, Jeff, and his husband, John Kelly; four grandchildren, Caroline, Alexander, Andrew, and Jack; and a brother, Stuart Shippey. She is also survived by her sister-in-law, Karen Shippey, and a niece, Rebecca Abenante, and her husband, Matt. She lived in Morristown, NJ, and Harwich.

Memorial Gifts: Contributions can be made in Melda’s name to the Chatham United Methodist Church: http://www.chathamumc.com/ or the Hale Family Center for Pancreatic Cancer Research at Dana-Farber Cancer Institute: https://halecenter.dfci.harvard.edu/support/.