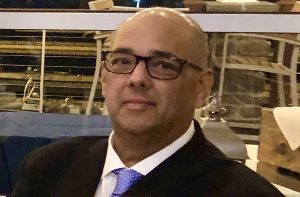 Michael Edward Standing passed away on October 27, 2021 at Mt. Auburn Hospital in Cambridge, Massachusetts. Michael’s peaceful passing with his wife and sons at his side was a welcome relief and considered a blessing after the medical turbulence he encountered and conquered during the last four years.   We take comfort in knowing that Michael is now with his beloved father, Donald J. Standing.

Michael was born on December 16, 1961, on Staten Island, New York. He moved with his family to Summit, New Jersey during his teenage years and graduated from Summit High School in 1979. After graduation, he went on to pursue his passion for food and cooking by graduating with honors from the Culinary Institute of America, in Hyde Park, New York  After several years of cooking professionally, Michael proudly followed his father into the insurance industry. This transition led ultimately in 2012 to the position of which he was most proud, President and CEO of A.I.M. Mutual in Burlington, Massachusetts.

Michael married Maureen Whalen in 1995, and settled into Chatham, New Jersey where they raised their two sons,  Andrew and Nathaniel, before they moved to Massachusetts.     Life on Edgehill Avenue was rich and filled with much laughter and joy.   Michael and Maureen were gracious hosts who always welcomed friends and family into their home.  Times spent socializing at the Standing home have evolved into well-loved stories oft repeated among friends and family.  Michael was an avid golfer, and enjoyed many wonderful rounds at Fairmount  Country Club, where he served on the Board.  Michael’s fondest memories are of the family vacation every year to the place he loved the most, Avalon, New Jersey.

For Michael, the person in front of him mattered more than anybody else in that moment.  This gift greatly contributed to his professional success and allowed  Michael to connect with everyone he met.   However,  this defining trait was never more evident than when he was with his family, whom he adored. People loved his curious mind, his cooking, and his kind heart. But most of all, they loved how he loved his family.

Michael is survived by his wife of 26 years, Maureen,  and his sons Andrew and Nathaniel. He is also survived by his mother Loretta Standing, (nee Lynch) brothers Christopher (Karan),  Donald, (Melissa), in laws Eileen Gleitz (Gary), Joe Whalen (Megan Pelino) and many loving nieces and nephews. He was pre-deceased by his father, Donald J. Standing, mother and father-in-law Eileen and Joe Whalen.

The family would like to thank Drs. David O’Halloran, Jill Melendez-Young, Vladimir Birjiniuk, and Susan Cowley for their compassion and professionalism in the last four years of his life. We would also like to acknowledge the extraordinary care he received from the nursing and support staff at Mount Auburn Hospital.

Finally, we are grateful for the support of John Myers and the A.I.M Mutual Board.

The family will be celebrating Michael’s life at Shawsheen Funeral Home, in Bedford, MA on Sunday 10/31/2021 with viewings from 1PM to 3 PM and 6 PM to 8 PM.

Viewings for Michael will also be held be at Bradley Funeral Home, in Chatham NJ on Thursday, November 4th, from 1 PM to 3 PM, and 6PM to 8PM.  There will be a Mass of Christian Burial at  10 AM at St. Patrick’s Church in Chatham, NJ  on Friday, November 5th, 2021. Interment will follow at Fair Mount Cemetery, Chatham, NJ.

In lieu of flowers,  gifts may be made to the Joe Andruzzi Foundation in memory of Michael Standing. More information regarding this foundation can be found at www.joeandruzzifoundation.org.