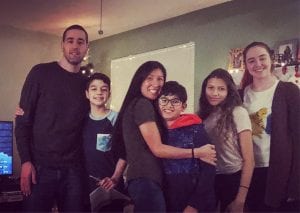 Michael S. Neer, peacefully made an all too early exit in his home surrounded by his loving family on Sunday, March 1, 2020; 3 days after his 41st birthday. He fought a strong battle with Glioblastoma for 22 months. Michael was a beloved Husband, Father, Son, Brother and Uncle. He is survived by his wife, May Rocha; his children, Rachael Neer, Bryan Neer, Luke Rocha & Melanie Sousa; his brother Jeff Neer and wife Kristin and niece Laura Neer; Parents David and Debbie Neer.

Michael was born February 27, 1979 in Chicago, Illinois, to David and Debbie (Moran) Neer. He was a graduate of Northern Highlands High School, acquired his undergraduate at University of Massachusetts Amherst and his MBA at Seton Hall University. He was a Senior Financial Analyst in the FP&A and Tax Departments at Dun & Bradstreet for 8 years. He was the in house expert for their product profitability model.

Michael enjoyed simple pleasures such as spending time with his family, playing tennis, playing music on his guitar and exploring the outdoors when the weather was nice. Michael was the most selfless person with a kind soul. If you knew Michael, you knew he was a man of few words; a quiet and humble man with a huge heart. Family, friends, and others whose lives Michael has touched are invited to leave condolences on this website.

Funeral Home:
Bradley, Smith & Smith Funeral Home Funeral:
A Memorial Service is being planned for a later date. This site will be updated as information becomes available.