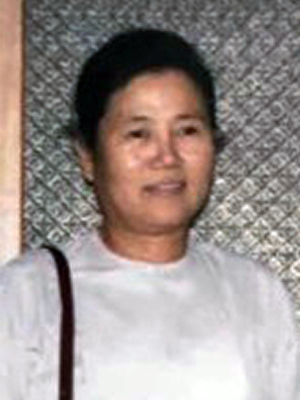 Born in Moulmein, Myanmar, Nesta was the daughter of Saw Chain Kyaung and Daw Sein Gyi. She earned her Master’s Degrees in Accounting and Economics from Rangoon University where she later became a professor of Economics. She retired in 1982 and came to the United States in 1994. Nesta was devoted to her family. She took care of her sisters during the difficulties of WWII and later went on to put one of her sisters through college.  Nesta enjoyed reading, knitting and cooking.

Nesta was the oldest and cherished sister of and survived by Lily Win, Kyu Kyu Khine, and Phillip and Anna Saw. Her older brothers Saw Yu Wan and Saw Yu Kyaung and her younger brothers Saw Yu Shin, Saw Yu Kyaing and Saw Yu Tin passed away before her. She was the beloved aunt and survived by her God Daughter Ann and husband Joel Miller, as well as nephews Steve, Richard and wife Choi Win in the US as well as several other nieces and nephews around the world. She was the great aunt of Bryan and Amy, Jessica, Kari and Laura Alexander, Ashley and Ryan Reavy, and Chris, Alexa and Nick Miller. She was also the great aunt of Dylan Win and Matthew Alexander, and great great aunt of Grayson, Luke, and Elliot Alexander, and Parker Reavy. In lieu of flowers, donations in Nesta’s memory may be made to the American Burma Buddhist Association, 63 Gordons Corner Rd, Manalapan, NJ 07726.