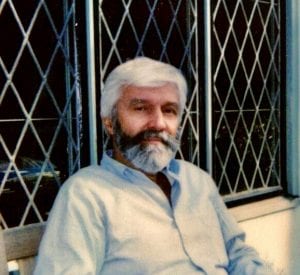 Paul Gerhard Steck died in his Green Village home on September 7, 2020. He was 91 years old. His wife Ruth Voellm Steck was at his side when he passed away. Paul and Ruth would have celebrated their 65th wedding anniversary on the 17th of September. They resided in either Summit or Chatham Township since 1956.

Paul was born on December 4, 1928 in New York City. He and his younger sister Emily were raised in Brooklyn and Staten Island by parents who both emigrated through Ellis Island from Germany after World War I. Paul graduated from Curtis High School and in 1949 received a BA in Mechanical Engineering from Brooklyn Polytechnic. His life literally took off when he enlisted in the U.S. Air Force in 1952, becoming a fighter pilot and first lieutenant during the Korean War. Paul piloted the F-84 Thunderjet on training missions all over Europe and was a proud part of the USAF’s 20th Fighter Bomber Wing, 55th Squadron. He stayed in touch with his fellow officers and attended many squadron reunions.

Ruth, born and raised in the Philadelphia area and a Temple University graduate, met Paul while he was home on military leave to attend his sister’s wedding. It was love at first sight and they married as soon as Paul was discharged from the Air Force in 1955. Ruth’s parents were also European immigrants; her father Hermann Voellm was a boyhood friend of Paul’s father back in Germany and their social connections enabled Paul and Ruth’s first meeting.

Paul’s return to civilian life also brought him back to working for his father’s custom sheet metal fabricating business that was founded in 1947 and located in Staten Island, where he had worked prior to joining USAF. Paul C Steck Inc soon expanded and moved to a new building in Springfield NJ. Paul became company president, acquiring Newark Industrial Spraying and Exothermic Molding in the 1980s. Paul worked steadily and successfully at Steck Inc for 40 years and was its president since 1960 until his retirement in 1995.

Paul served on many boards and enjoyed volunteering for a variety of non-profit organizations. He served as board president for: Springfield Rotary; SCORE Morristown Chapter; Gloria Dei Lutheran Church of Chatham; the Noe Pond Club; and Ocean Dunes Coop in Amagansett NY. He was active with Summit’s Old Guard; the Visual Art Center of NJ; the Great Swamp National Wildlife Refuge; and the Melrose Lane Condo Association.

Paul had a creative side and an eye for photography and the fine arts, taking many VACNJ classes during retirement in pastel painting and ceramics. He also ventured into more daring activities such as ballroom dancing and windsurfing. He loved driving his Porsche and was involved with the local NJ chapter of the Porsche Club of America for many decades.

Paul is survived by his wife Ruth and their two children, Paul Karl and Christina Elizabeth. His four grandchildren – Julia and Brian (Jill Gerschwiler) and Spencer and Tyler (Stephen Young) – were his pride and joy and kept him entertained at many family gatherings.