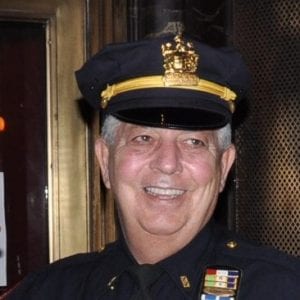 Peter Blaise Gallagher, 72, of Chatham, NJ and Moose Pond, Maine passed peacefully at home on December 27, 2020. Peter is survived by his loving wife of almost 50 years, Deborah, and their beloved son, Joseph. He is also survived by sisters and brothers-in-law, Claire and Ed Farrell, and Kathleen and Rick Ritacco, and brother and sister-in-law, Jack and Elizabeth Gallagher. He is predeceased by his parents, Jack and Jean and his brother, Gerard Gallagher.

Peter is survived as well by his sisters-in-law and brothers-in-law Bonnie and Michael Stoia, and Coleen and John Butler. Also surviving him are numerous cousins and beloved nieces and nephews and their spouses, intended, and grand nieces and nephews, Jack and Kevin, Megan, Angel, Michael and Meghan, Liam, Cole and Isla, Bayley & Anand and Delaney & Brad. He was also predeceased by the dogs who loved him, Peaches, Oakie, and Finn.

Peter was a devoted husband, father, and friend who rose to the rank of Captain before retiring from the Jersey City Police Department. In his life and in his calling, he exemplified the virtues of courage, honesty, compassion and selfless dedication to others. Anyone who had the good fortune of knowing him for any length of time soon realized that Peter may not have always believed people, but he did believe wholeheartedly in people. He had an uncanny ability to assess people and situations with a clarity tempered by his unique sense of humor.
The oldest of five siblings, Pete grew up on Duncan Avenue in Jersey City. He belonged to Saint Aedan’s Parish, where he served as an altar server and a member of the patrol boys. While his playfulness often brought him the attention of the Dominican nuns who taught him, it was here that he saw the formation of his lifelong relationship with his Lord and Savior, Jesus Christ. He had a singular devotion to the Blessed Mother and to her message of reconciliation, conversion, prayer and fasting.

It was also at St. Aedan’s that Pete developed a love of athletics, spending every waking moment throughout the year, winter and summer, rain or shine, on the basketball courts. He was a phenomenally good basketball player, excelling on offense and defense; recognized for his hustle, his intelligence and his playmaking skills, he raised the level of those who played with him or against him. He had a signature three point fade away jump shot from the corner that was both lethal and that always left him out of bounds.
While attending Saint Mary’s High School in downtown Jersey City, he met his future wife, Debbie Gallagher, who was to become the love of his life and his lifelong partner in an adventure that lasted well over fifty years. Together they raised their son, Joseph, whom Pete loved from the moment he laid eyes on him throughout his entire life.

Early on, Pete worked on the moving trucks at the family business, the Al Smith Moving Company. By age eighteen, he was running his own crew of men. Following stints on Wall Street and for other trucking companies, he joined The Jersey City Police Department. It was with the Jersey City police that he came into his own and began his life’s work. He transitioned from uniformed patrol to a street crime unit. He was assigned to the Prosecutors Office and worked in various other capacities on the Police Force. Pete ascended through the ranks from Detective to Sergeant, Lieutenant, and ultimately, to Captain. During this time, he received numerous excellent service awards and commendations for his work. He was recognized for his work following the 9-11 attacks on the World Trade Center. He was particularly proud of his efforts to train and prepare the men in his charge and for his contributions to the city wide emergency evacuation plan for the city of Jersey City.

His vocation may have been police work but his true life’s work was as a husband, as a father, a friend and as a neighbor. He loved his wife Debbie and son Joseph without ceasing and he enjoyed the love and respect of all his many nieces and nephews, to whom he was always their beloved “Uncle Pete”. Basically a big kid at heart, he brought a sense of playfulness and adventure to all his interactions with them. He loved them all.
In addition to a life of service to his community and to his family, He and Debbie remember many fond experiences they enjoyed together at their cabin in Moose Pond, Maine. An avid fisherman and outdoorsman, he had a respect for all living things and for the environment. He was a self educated man, as comfortable with the roughest elements of society on the streets of Jersey City as he was with the wild beauty of nature in the great outdoors. He read voraciously and could speak at length on a variety of subjects. He had a love of Irish American culture and the role of the family story in the greater narrative. Closer to his intellectual heart were the Native American cultures that preceded the Europeans in the Americas.
Peter Gallagher was a member of The Knights of Columbus, Cpl. Paul Madden Council 5563, Sussex County, New Jersey.

In his life he helped people no one has ever heard of and no one will ever know about. He left the world a better place than the one he found, because he was in it. He had the utmost respect for and dedication to the men and women of law enforcement and most importantly, his generous and loving heart found its greatest expression in his love for his family.

The family requests that in lieu of flowers donations to the Shrine of Saint Joseph be made or to think of Pete and complete an act of kindness in his honor.

Funeral Home:
Wm. A. Bradley & Son Funeral Home Visitation Hours:
A memorial gathering scheduled for 10:00 AM, followed by a Catholic Mass scheduled for 11:00 AM will be held on Wednesday, January 13th, 2021 at The Shrine of Saint Joseph, 1050 Long Hill Road, Stirling, New Jersey 07980. Memorial Gifts:
The family requests that in lieu of flowers donations to the Shrine of Saint Joseph be made or to think of Pete and complete an act of kindness in his honor.