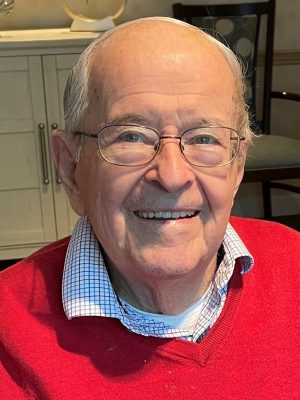 *Click here to live stream the Funeral Mass at St. Virgil Church on Thursday, August 19th, 2021 at 10am*

Peter and Joan moved to Morris Plains, NJ in 1956, where they raised their 5 beautiful children.  He was an active member of Notre Dame of Mt. Carmel Church.  He was a member of the Holy Name Society and the Building Committee.

In 1986, Peter and Joan moved to Panther Valley in Allamuchy Township. He served on the Board of Trustees for three years and was Chairman of the Recreation Committee for six years.  He was Co-Founder of Allamuchy Senior Citizens and was Chairman of Allamuchy Republican County Committee.  Peter was a founding member of Windows on the World at the World Trade Center in New York City. Also, a member of the Belle Harbor Yacht Club, the Mercier Club in Montclair, NJ, and the American Legion Post 164. He retired from Kimble International in 1995. In October 2007, Peter and Joan moved to the House of Good Shepherd in Hackettstown NJ, where he served as Vice President of the Residence Council for two years.

A Memorial Mass will be held on Thursday, August 19th, 2021 at 10am at Saint Virgil’s Church, 250 Speedwell Ave, Morris Plains, NJ 07950.  In lieu of flowers, donations can be made to benefit childhood cancer by clicking here.

Funeral Home:
Bradley, Haeberle & Barth Funeral Home Funeral:
A Memorial Mass will be held on Thursday, August 19th, 2021 at 10am at Saint Virgil's Church, 250 Speedwell Ave, Morris Plains, NJ 07950 Memorial Gifts:
In lieu of flowers, donations can be made to benefit childhood cancer by clicking the link above.