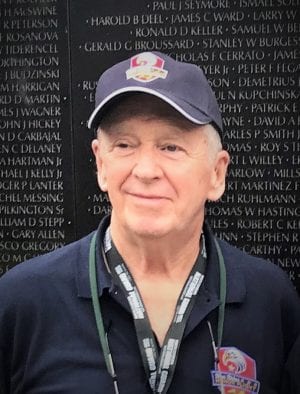 He was born on November 22nd, 1943 in Philadelphia, PA to Ephraim Thomas Lillard and Agnes Matilda Ramsey Lillard. His family moved to Chatham, NJ where he graduated from Chatham High School in 1961. A graduate of Wake Forest University, Class of 1965, Peter then enlisted in the US Navy and attended Officer Candidate School in Newport, RI. After graduating OCS he spent three years in active duty. He served in the Vietnam War on the USS Okinawa. Following his honorable discharge, Peter returned to New Jersey where he began a career in banking and trust management. Peter married Marjorie Lois Ohaus on January 19, 1975 – a whirlwind romance that began with a game of tennis arranged by Marjorie’s mother, followed by a wedding six months later. They moved to Madison, NJ where they raised their five children for 37 years.

After retiring from Peapack Gladstone Bank in 2012, Peter and Marjorie began construction on their dream home in Brevard, NC. The Blue Ridge mountains have always held a special place in their hearts as Marjorie’s parents had a house at Lake Toxaway and their middle daughter, Margot Lillard Drennen, and her family live in the area.

Peter was passionate about his hobbies. He spent his leisure time hiking, golfing, traveling, and shooting sporting clays. He hiked the Grand Canyon seven times, learned German, and was a doting dog owner, particularly of pit bull mixes. He loved to share his passions with friends and family, whether it be bringing his children and grandchildren to his Field club, golf trips with his friends, or proudly sharing his love and knowledge of history. Peter also loved battlefields and road tripping domestic and abroad; there wasn’t a battlefield that he didn’t stop at while traveling. Peter enjoyed volunteering at the Veteran History Museum of the Carolinas in Brevard.

He valued his friendships and laughter. Regardless of how long it had been since they had seen each other, Peter and his friends picked up where they left off. Peter was a loving and dedicated father and “Opa.” He is survived by his wife of 45 years, Marjorie Ohaus Lillard; five children, Matthew Lillard of Waitsfield, VT and his wife, Danielle, Georgia Wallner of Leawood, KS and her husband, Peter, Margot Drennen of Pisgah Forest, NC and her husband, Chris, William Lillard of Egremont, MA and his wife, Kim, and Charlotte Spendley of Morristown, NJ and her husband, Will; sister, Joan Worthington of Mendham, NJ; his in-laws, nieces, nephews; and his twelve grandchildren, Liam Wallner, Ephraim Drennen, Louisa Wallner, Adeline Drennen, Bridger Lillard, Cordelia Lillard, William “River” Lillard, Linus Wallner, Eleanor Drennen, Bailey Lillard, Leonhard Wallner, and Blake Lillard.