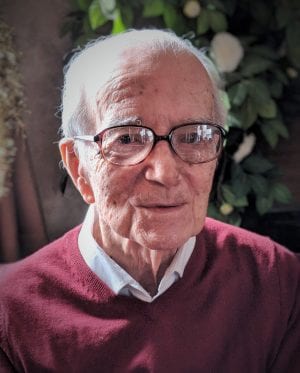 On April 30, Richard (Dick) Philip Rampolla, Sr. passed away quietly in his home surrounded by family members.  He was 93.

Born in Bayonne, NJ, Dick attended Holy Family Academy before graduating Cum Laude from Saint Peter’s College (University) in three years.  After graduation, Dick had a brief stint teaching high school Math before he began his lifelong career as a recognized expert in the insurance industry.  Casualty insurance was Dick’s specialty and passion.  He attributed his professional accomplishments to a personal concern for his clients, a thirst for knowledge, and a commitment to excellence.  He enjoyed finding the ill-written clause and rewriting it for clarity and purpose.  He was well respected in the business for his great attention to detail and exceptional work ethic.  He remained active until his retirement at age 83 from the position of Executive Vice President for Slapin, Lieb, Pike, and Rampolla Insurance Agency.

Dick and Madeleine started their married life in Bayonne before they bought their first house in Cranford and then found their long-time home and community in Maplewood where they lived since 1962.  During his tenure in Maplewood, Dick became a committed volunteer with the goal of making his adopted hometown the best it could be.  This led to volunteer work with the following organizations:

In recognition of his dedicated volunteer work and leadership positions with these local organizations, Dick received the Maple Leaf Award in 1994.

He was our magical Pop who gave us Easter egg hunts, Pirate Treasure hunts, MugWump Stories, coins appearing from ears, skipping songs, dancing, poems, love notes and protection from thunderstorms.  He was the “wish-it-away” medicine man and the shaving cream clown.  He taught us the joy of picking dandelions and searching the shoreline for seashells.  He loved to whittle fanciful pieces out of driftwood found on the beaches of Cape Cod and Lavallette. Pop was the planter of flowers and the keeper of the gardens.  He was our Father Christmas.  He dreamed the impossible dream and stood by those of us who sometimes tilted at windmills.  He provided guidance, “Neatness counts supreme” and love.  One thing Pop was not was “normal acting.” We will miss him but will always cherish the wonderful memories we shared.