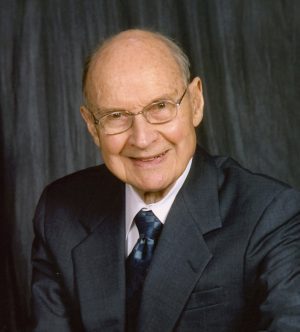 Calling hours will be held at Bradley, Brough & Dangler Funeral Home, 299 Morris Avenue, Summit, on Wednesday, September 7, from 3-6 PM.  A Graveside Service will take place on Thursday morning, September 8, at 11:30 AM, at the Springfield Presbyterian Church Cemetery, 101 Taft Lane, Springfield, NJ.  In lieu of flowers, donations are requested in his name for the Summit Volunteer First Aid Squad, P.O. Box 234, Summit, NJ 07902-0234.Russ was born in Youngstown, OH, in 1922, the son of John H. and Elizabeth (Griffith) Helsel.  He graduated from Scienceville High School in 1939, attended Stanton Preparatory School in Cornwall, NY, the Ohio State University, and then transferred to the United States Naval Academy, Annapolis, MD

.  Mr. Helsel graduated from USNA in June 1943, with the Class of 1944.  He was commissioned Ensign in the US Navy, and served abroad the USS Jenkins (DD-447) for the remainder of World War II.  The ship participated in battles in the south Pacific, including the Battle of Leyte Gulf, Philippines, in October 1944.  The ship earned 5 battle stars for engagements against the enemy.  Mr. Helsel continued his naval service on the east coast after the war, resigning his regular navy commission in 1947.  He then began a long career at the General Fireproofing Company in Youngstown, and joined the organized Naval Reserve unit in Youngstown, assuming various command positions there.  He was recalled for active duty in the Navy in the summer of 1950, and served as captain of LSMR-527 during the Korean conflict.  After returning to Youngstown, he continued his career at General Fireproofing as well as in the naval reserves.  He earned the rank of Captain in 1964 while serving as commander of the five Youngstown units.  Captain Helsel retired from the active reserves in 1982.

Russ was transferred by General Fireproofing to NJ in 1970, and continued with GF until he retired in 1982.  He continued his career in the office furniture field by spending 25 years at Arbee Associates in Union, NJ. He was a member of The Springfield Presbyterian Church, where he was active in the Men’s Fellowship group, as well as serving on the Session and audio committee.  In addition, he is a Lifetime member of the Wick Lodge #481 in the Youngstown area.  He is a lifetime member of the US Naval Academy Alumni Association, as well as a member of the Blue and Gold Society. Russ was predeceased by his wife, Sally (Gordon) Helsel, as well as his parents and three sisters.  He is survived by his son, Thomas Helsel, and two daughters, Judy (Cliff) Lawson and Jane (Steve) Santangelo, as well as a grandson Steve (Shanon) Lawson, and two great-grandsons, Luke and Nick Lawson.  He is also survived by six nephews and three nieces. The family would like to thank Darnae Williams and Senior Helpers, as well as Yvonne Nichols, for their invaluable care of our father during the past few years. To send the family a condolence, please visit, www.bradleyfuneralhomes.com.