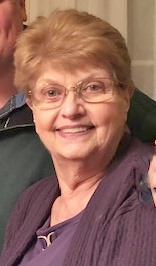 Born in Dover, New Jersey, Sandra L. Evans lived most of her life in East Hanover and Whippany, and on January 10, 2022, the world she lived in became a little less cheerful with news of her passing.

Sandra, or Sandy to her family and friends, was raised in East Hanover, New Jersey, where as a teenager she worked in a local florist her parents owned, and her love of 60s Motown music grew as she became a jazz and tap dance instructor. Upon graduating from Hanover Park High School in 1964, Sandy worked as an executive secretary for the Mennen Company.  Following marriage and a move to Whippany, she became the mother to sons Jeffrey and Gregory, and to a daughter, Lori, and became the super mom that she always wanted to be.  Whether it was baking homemade cakes and cookies for her kids’ birthday parties, cheering her children on while watching them perform on athletic fields and the stage, or finding the perfect yet impossible to find gift to make Christmas a huge success for her kids, Sandy’s love for her children was known to anyone who spoke with her.  As her children grew, Sandy took jobs as an aide at Salem Drive School in Whippany, a sales associate at Epstein’s Department Store in Morristown, and finally as a clerk in the Special Civil Division of the Morristown Courthouse, yet no matter how tired she was from work, she always found a way to cook a delicious meal for her family, provide advice when needed, and celebrate her children’s triumphs.  As Sandy’s children grew, she embraced and loved a second set of children—the spouses of her kids. Jeff’s wife, Jen, and Greg’s wife, Kelli, became like daughters to her, while Greg, Lori’s husband, became another son.  After turning sixty, Sandy’s family grew again, this time with the birth of her grandchildren: Matthew, then William, then Julia, and finally Olivia and Nicholas. Sandy’s infectious laugh, warm hugs, and boundless love for her grandchildren made each one feel like they were her favorite. Of course, she also had a special place in her heart for her granddogs, Jack, Annie, Lily, and Tucker.  Even though she was in pain from an infection that would ultimately take her life, Sandy enjoyed the last six months of her life, especially when spending time with her family and celebrating her birthday and holidays.  Sandy’s life may have ended, but the love that she shared with those who knew her ensures that her memory and spirit will always be alive.

A funeral service will be held at Bradley-Braviak Funeral Home, 49 Whippany Rd. in Whippany on Saturday, January 15th at 10:00 am.  Interment will follow at Restland Memorial Park in East Hanover.  Relatives and friends are invited to visit at the funeral home on Friday, January 14th from 4:00 pm to 8:00 pm.